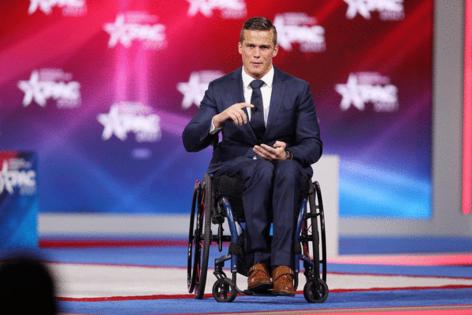 “When Madison was first elected to Congress, he did a great job. Recently, he made some foolish mistakes, which I don’t believe he’ll make again,” Trump said Monday on Truth Social, the social media platform he founded last year.

But that second chance never came.

State Sen. Chuck Edwards snuck past Cawthorn in the Republican primary for North Carolina’s 11th Congressional District — a district that has, in the past four years, elected both Cawthorn and former White House Chief of Staff Mark Meadows. Edwards beat Cawthorn by a little more than 1,000 votes, according to unofficial results.

“This is simply incredible,” Edwards said in a statement Tuesday night. “Against all odds, we fought hard to win this election and provide clear conservative leadership for the mountains.”

As it turns out, a Trump endorsement can only go so far when the rest of your party is willing to leave you behind. Cawthorn’s loss comes after months of scandal that ultimately led top North Carolina Republicans, including U.S. Sen. Thom Tillis, state Senate leader Phil Berger and N.C. House Speaker Tim Moore, to openly back Edwards. Edwards was one of seven candidates challenging Cawthorn in the Republican primary.

Of course, when it comes to political representation, it doesn’t get much worse than Madison Cawthorn. It’s hard to say what, exactly, caused Cawthorn’s constituents to reject his bid for a second term. Maybe it was his inability to follow basic laws, including his tendency to bring weapons to places they don’t belong. Perhaps it was the salacious videos, or the ethics complaints. Or maybe it was because, bad press aside, he was never really there.

In an era where Trump still has an iron grip on the Republican Party, there’s some comfort to be found in knowing that there is still a point — both for the party and for voters — at which bad behavior becomes disqualifying. It did take extraordinarily bad behavior, as well as threats to their own political success, for members of the Republican establishment to turn their backs on Cawthorn, however. There was plenty of awfulness they ignored, and they ignored it for a long time.

In retrospect, the beginning of the end may very well have been when Cawthorn decided last year to switch to a new district west of Charlotte that many believed to have been drawn specifically for Moore. At the time, Cawthorn said he feared another “establishment, go-along-to-get-along Republican” would prevail in the district if he didn’t run there.

Voters in western North Carolina can rest assured that the next person they send to Congress will almost certainly be better (and less embarrassing) than Cawthorn. But the biggest takeaway from Cawthorn’s loss should be this: Trump and his parade of politicians are beatable, so long as Republican leaders have the courage and conviction to stand up to them.