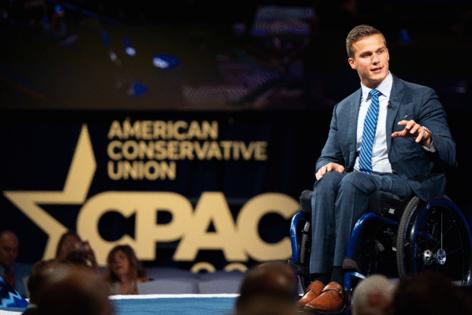 Edwards maintained a lead over Cawthorn throughout Tuesday night, and even though the gap between the two started to narrow, Cawthorn called his opponent after leaving his Election Night watch party in Hendersonville and conceded the race. At his own party in Flat Rock, about 15 minutes away, Edwards thanked voters for backing him to represent them in Congress.

“I’m so happy for the folks here in North Carolina’s 11th district,” Edwards told reporters. “The energy that they showed, the enthusiasm to have a greater voice in their government — we’ve all got a lot to be proud of tonight.”

Political observers consider the 11th Congressional District, which includes Buncombe and the city of Asheville but also other, more conservative counties in the westernmost part of the state, to be solidly Republican. That means that Edwards will likely face an easy contest against Beach-Ferrara in the fall.

When asked what comes next for him, Edwards said his “first focus” was to run against and defeat Beach-Ferrara.

After that, he said, his priorities would be “removing the gavel out of Nancy Pelosi’s hand, and then taking the teleprompter from Joe Biden and restoring the policies that we enjoyed under the Trump administration, to help get this country back on track.”

Who is Chuck Edwards?

Edwards is currently serving his third full term in the North Carolina Senate. He was appointed to the 48th Senate District in August 2016 after the resignation of former Sen. Tom Apodaca and won reelection in 2016, 2018 and 2020.

In the state Senate, Edwards serves as chairman of the committees on agriculture, energy and environment; appropriations on agriculture, natural and economic resources; and commerce and insurance.

A former White House aide potentially delivered the kind of political blow to Donald Trump that his would-be rivals for the Oval Office in 2024 have not yet been able to land.

WASHINGTON — The Supreme Court ruled Wednesday an injured Iraq War veteran may sue to get his job back as a Texas state trooper in accordance with a federal law guaranteeing that returning soldiers can reclaim their ...Read More

Donald Trump is no longer in contempt of court for failing to respond to subpoenas in a probe of his company’s assets, a New York judge ruled, formally resolving a dispute with the state attorney general that resulted in...Read More

WASHINGTON — The Supreme Court backed a broader reading of the federal government’s war powers Wednesday, finding that Congress can give veterans the ability to file lawsuits against states if they face job ...Read More