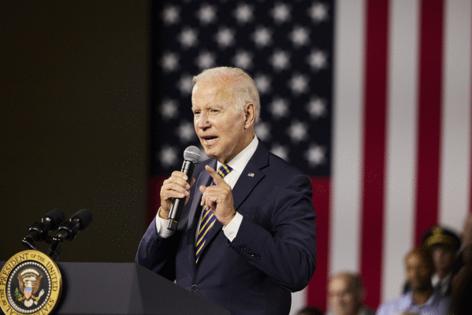 President Joe Biden accused former President Donald Trump of “dismissing and ignoring the forgotten people he promised to help” in a unusually blunt attack on Wednesday, indicating that the White House may be trying to turn the midterm elections into a referendum on his predecessor.

Biden, at an event in Cleveland, slammed Trump repeatedly during his remarks unveiling new regulations governing assistance intended to bolster multi-employer pension plans. He said the former president kept Republican lawmakers from voting for the legislation that funded the program.

Trump, Biden told assembled union workers, “didn’t have a commitment to you.”

The president has largely avoided addressing his predecessor by name, and in previous speeches had obliquely attacked Republican congressional candidates as “ultra MAGA” — a reference to Trump’s Make America Great Again slogan — without mentioning him directly.

But on Wednesday, Biden repeatedly called Trump out by name, even joking as a mobile phone rang that the former president was calling to complain. The president also criticized Republican senators, saying South Carolina’s Lindsey Graham had a plan to cut Social Security, while Florida’s Rick Scott had proposed a “shameful” plan that would require Congress to reauthorize programs like Medicare and Social Security every five years.

The White House estimated that with the funding secured in the pandemic bill, some 200 multi-employer plans affecting between 2 and 3 million workers would no longer risk insolvency or dramatic benefit cuts.

The more explicit attacks on Trump come as Biden has seen his approval rating slump to below 40% nationally according to the FiveThirtyEight polls analysis, amid concerns about inflation and the overall state of the economy.

In recent days, the White House has faced questions about the president’s more muted reaction to the recent Supreme Court decision overturning Roe v. Wade and the July 4 mass shooting at a parade in the Chicago suburbs, compared to Democratic governors like Illinois’ Jay Pritzker and California’s Gavin Newsom.

“The president has been very loud and very focused on those two issues,” Jean-Pierre said.