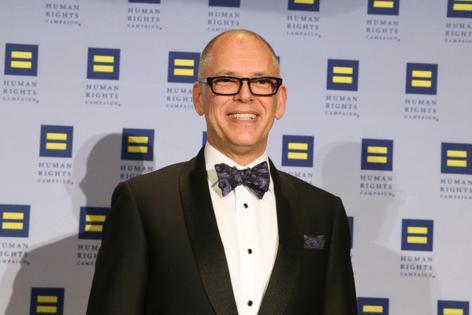 I've thought about Jim Obergefell often since we first spoke nine years ago, after his historic marriage to his husband on an airport tarmac outside Baltimore.

He's come to mind mostly during big moments in my own life as a gay man in America.

I thought of Jim and his late husband, John Arthur, when I first considered proposing to my husband, Aaron, and the promises — in sickness and in health, till death do us part — that I'd be making.

I thought of Jim and John again when Aaron and I exchanged vows in San Francisco City Hall in 2018, with our families around us and the bust of Harvey Milk nearby. We chose City Hall for its beauty and ease, but could have been anywhere in the country — a right Jim and John won us by overcoming a mountain of obstacles just to reach that tarmac.

I thought of Jim again last week, around the time I was emailing our lawyers about the next set of paperwork to file in our pursuit of U.S. citizenship for Aaron, who is Australian.

The need to lock in Aaron's rightful place in this country suddenly felt more urgent after Politico published a leaked draft of a U.S. Supreme Court opinion that called for the landmark abortion rights case Roe vs. Wade to be overturned.

Like President Biden, many legal scholars and LGBTQ activists across the country, I worried that the same legal arguments used to topple Roe would be redeployed by anti-gay factions in this country to go after the right to same-sex marriage that was established in Jim's case, Obergefell vs. Hodges, in 2015.

In his draft decision in Dobbs vs. Jackson Women's Health Organization, which is the name of the case challenging Roe, Justice Samuel A. Alito Jr. argues that the Roe ruling in 1973 essentially invented a right to abortion that was neither articulated in the Constitution nor "deeply rooted in the nation's history and traditions."

He tosses aside the legal conclusion of Roe that the right to an abortion was grounded in the broader right to liberty and privacy, and concludes that Roe unjustly stripped the authority to legislate such matters from the states.

Alito wrote that his line of reasoning did not apply to rights other than abortion. But were the court to adopt Alito's reasoning or anything close to it, some scholars believe other rights that hinge on broader protections but aren't explicitly spelled out could fall, too.