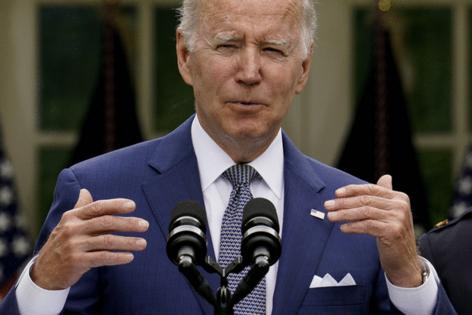 President Joe Biden’s hopes for a political reset have been overwhelmed by an unrelenting series of economic setbacks, adding to the challenges Democrats face as they court exhausted voters ahead of the crucial midterm election in November.

On top of it all, a shortage of baby formula has left parents in the world’s wealthiest country scrounging empty store shelves to feed their children. The crisis is drawing bipartisan condemnation on Capitol Hill, with lawmakers accusing the administration of moving too slowly after an Abbott Laboratories factory in Michigan was shut down over safety issues.

Cast against the backdrop of Russia’s war in Ukraine and the ongoing pandemic — the U.S. surpassed 1 million COVID-19 deaths recently — it’s little wonder the nation’s mood is grim. Biden’s inability to assuage Americans’ growing unease was highlighted as a U.S. consumer sentiment measure released Friday hit its lowest reading since 2011, a six-point decline from April that was worse than any forecast in a Bloomberg survey of economists.

The nation’s economic struggles and the administration’s tepid response are striking at a core promise of the Biden presidency: that he would return competence to the White House. And there are clear signs Americans hold their president accountable. Just 38% approve of the job Biden is doing, according to a Monmouth University poll released Thursday.

Most respondents in the survey said it’s currently difficult to pay for essentials like gas, grocery bills and health insurance deductibles.

“We understand there are challenges you’re dealing with every day,” White House Press Secretary Jen Psaki told reporters on Friday. “Costs are too high. It is too expensive to fill up your gas tank. Food is too expensive at the store. And our focus right now is on taking every step possible to address those issues.”

Yet Biden has often sought to shift blame. He’s said gasoline and food cost too much because of “Putin’s price hike,” in reference to the Russian president who ordered the Ukraine invasion, and he said recently that the Federal Reserve is primarily responsible for combating rising prices.

The baby formula crisis presents a particularly acute political risk. Democrats have looked to reorient their midterm strategy to wooing back female voters after the leak of a draft Supreme Court opinion that would overturn the landmark Roe v. Wade decision establishing abortion rights nationwide.

But Biden — a practicing Catholic whose congressional career was dotted with votes restricting federal abortion spending — has for now acted as a reluctant messenger, preferring sweeping legal and philosophical arguments for maintaining Roe rather than explicitly espousing his support for abortion rights.