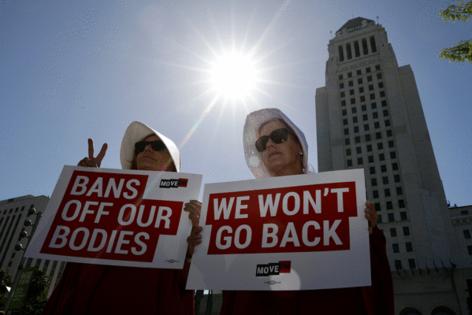 Donna Troy Wangler was among the few women gathered at the L.A. City Hall rally who wasn’t toting a sign proclaiming her views. But the Inland Empire high school teacher had a poignant story to share about her daughter Lauren, who was born with Down syndrome and 6 six years old when she died.

“Some people seem to think it’s a snap for moms like [me] to have an abortion,” Wangler said. “I decided to keep my child — and that was a traumatic load to carry. But gosh, the love we shared changed my life forever.”

Holding up her cellphone, she gushed, “Here’s a photo of Lauren — Look how proud of herself she is!”

“So, I’m here today,” added Wangler, 53, “because I want the world to know that abortion is a woman’s choice. No one else’s.”

The rally is one of hundreds taking place across the country, including in San Francisco, San Diego, Washington, D.C., New York, Chicago and Austin, Texas.

Shante Young, 28, a construction company project engineer who lives in Costa Mesa, and her boyfriend Dylan Sanchez, 30, a retail salesman who lives in Whittier, sought shade under a tree in Grand Park as they listened to the voices of abortion rights supporters booming through loudspeakers from the stage in front of City Hall. A few yards away, anti-abortion demonstrators banged drums and used a megaphone to drown out the activists’ voices.

“If they start taking away women’s rights, they’re going to take away the right to vote,” Young said. “What’s next? It’s very scary.”

News helicopters hovered overhead, and hundreds of protesters around them applauded and cheered the speakers on stage. “The biggest thing is to make our presence known,” Sanchez said. He, too, fretted that the loss of abortion rights would foreshadow the loss of other rights. “I’m just concerned that one thing is going to change another thing, like a domino effect,” he said.

Betty Linville, 68, who lives in Koreatown, attended the rally with a friend, Anna Gladstone, 62, who lives in the Hollywood Hills.

Former President Donald Trump ripped into Republican U.S. Rep. Liz Cheney at a rally in Wyoming Saturday, as part of his quest to defeat the incumbent who has emerged as his most vocal and active GOP critic.

FORT LAUDERDALE, Fla. — As Florida and much of the U.S. impose major restrictions on access to abortion, Florida residents don’t like the trend.

The overwhelming majority of Florida residents — including more than ...Read More

President Joe Biden decried U.S. gun violence after two mass shootings in two weeks, telling university graduates in his home state of Delaware “we must stand stronger” to make the country safer, including for children...Read More

LOS ANGELES — GOP Rep. Young Kim of Orange County, California, has all the elements for a fairly easy path to reelection in November — a gloomy national mood favoring her party, a formidable campaign war chest and a ...Read More

WASHINGTON — President Joe Biden has vowed to do everything in his power to fight record-setting gasoline and diesel prices, but he’s up against a stark reality: There are few options for taming the surge.