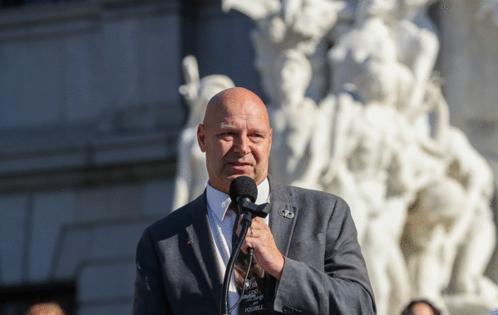 The endorsement could very well put him over the top and deal a crippling blow to 11th-hour efforts by some establishment Republicans to stop Mastriano, a far-right, staunch Trump ally who they fear will lose the general election in November.

"There is no one in Pennsylvania who has done more, or fought harder, for Election Integrity than State Senator Doug Mastriano," Trump said in a statement Saturday morning. "He is a fighter like few others, and has been with me right from the beginning, and now I have an obligation to be with him."

Mastriano, by contrast, has been leading by double-digits in recent polls of the nine-candidate race.

"I'm honored to receive the endorsement from President Trump today," Mastriano said in a statement. "But the honor is not for me. It's for the millions of hard-working Pennsylvanians who want their individual liberties restored, power returned to the people, and for their elected leaders to fulfill the America First — and Pennsylvania First — agenda."

The endorsement amounts to a safe bet at a time when other Trump-backed candidates — including Oz and David Perdue in Georgia's gubernatorial race — are at risk of losing. Trump's choice in Nebraska, Charles Herbster, lost in a gubernatorial primary this past week. Of course, plenty of Trump's picks have won — like author J.D. Vance in Ohio's GOP Senate race.

Trump made his pick in Pennsylvania's governor's race days after some establishment Republicans launched a last-minute effort to stop Mastriano, who they think will lose badly in November to state Attorney General Josh Shapiro, the presumptive Democratic nominee.

Mastriano was a leading figure in the effort to overturn President Joe Biden's 2020 victory in Pennsylvania.

He brought buses to Washington for the Jan. 6, 2021, "Stop the Steal" rally that led a pro-Trump mob to storm the Capitol, and has continued to spread baseless conspiracy theories about the election. He has said he left before things turned violent, and has been subpoenaed by the congressional committee investigating the attack.

WASHINGTON — Census miscounts in Texas and Florida may have been big enough to cost those states a congressional seat this decade, and may have helped states such as Rhode Island keep a seat, according to data in a ...Read More