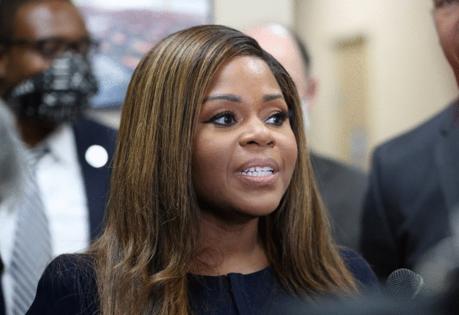 Cherfilus-McCormick held an insurmountable lead Tuesday evening over the other four candidates in the special election in the Broward-Palm Beach County 20th Congressional District. She’ll fill the vacancy created by the April 6 death of U.S. Rep. Alcee Hastings.

As soon as results from mail ballots and in person early voting were posted just after polls closed at 7 p.m., Cherfilus-McCormick had a commanding lead. The Associated Press declared her the winner at 7:09 p.m.

Cherfilus-McCormick is flying to Washington, D.C, on Wednesday. She hopes to be sworn in at 9 a.m. Thursday, something she said depends on the Florida secretary of state quickly validating the results

Cherfilus-McCormick’s election wasn’t in doubt — at least since November, when she won a fiercely competitive special Democratic primary election, besting a field that included six current or former elected officials who collectively had had been elected to office 26 times.

With her victory in Tuesday’s special general election, Cherfilus-McCormick makes history. She becomes the first Haitian-American Democrat elected to Congress. The 20th District, which stretches from Miramar in southwest Broward to Riviera Beach in northeastern Palm Beach County, includes most of the African-American and Caribbean-American communities in the two counties.

During the campaign Mariner and ter Maat rejected the suggestion that they couldn’t adequately represent residents of the district, in which 53% of the residents are Black and 27% Hispanic.

All four were running significantly behind Cherfilus-McCormick on Tuesday night.