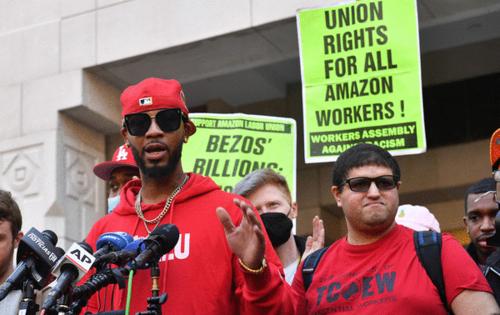 This is the most exciting — and promising — moment for the nation’s labor movement in decades thanks to the landmark union victories at Starbucks and Amazon, as well as the spread of union drives to well-known companies like Trader Joe’s and Apple. To find similar excitement about unions, one would have to go back to the 1930s and the victorious Flint Sit-Down strike against General Motors, which inspired a tremendous wave of strikes and union drives across the U.S.

What has made this moment even more promising for labor is the huge enthusiasm that many young workers are showing toward unions, including museum workers, nurses, journalists and graduate students, among them the 17,000 University of California grad student researchers who won union recognition in December. Two recent surveys also hold promise for labor: 74% of workers 18 to 24 say they would vote to join a union if they could, and a Gallup poll found that 77% of Americans 18 to 34 approve of unions.

Propelled by this youthful excitement, the Starbucks union drive has gone from workers at a single Starbucks in Buffalo, N.Y., voting to unionize in December to 75 Starbucks unionized today, with workers at nearly 200 more petitioning for unionization votes. One measure of this youth-driven enthusiasm: John Logan, a labor studies professor at San Francisco State, says anti-union consultants often boast that they defeat unions 95% of the time in union votes, but Starbucks baristas have voted to unionize 90% of the time — winning 75 of 84 union elections.

The union victory at a gigantic, 8,300-employee Amazon warehouse on Staten Island, New York, is among the most important union wins in nearly a century. Like that Flint Sit-Down triumph over General Motors, then the nation’s largest corporation, the victory against Amazon has huge symbolic importance and has inspired workers nationwide. Christian Smalls, the 33-year-old fired Amazon worker who led the Staten Island campaign, says workers at 100 other Amazon facilities have told him that they too want to unionize. And now Apple workers are seeking to unionize in New York, Atlanta and Maryland, and so are workers at a Trader Joe’s in Massachusetts. Workers at an REI store in Manhattan voted 88-14 in March to make theirs the first unionized REI store, while workers at two Google Fiber stores in Kansas City also unionized.

Young workers are embracing unions for myriad reasons. Many are upset about unaffordable rents and mountains of student debt. Many have been inspired by Sen. Bernie Sanders, I-Vt., and his enthusiasm for unions. Many young workers are frustrated about how they were treated during the pandemic — when they were stressed out from understaffing, a shortage of protective gear and work schedules that changed constantly. They were upset because many customers didn’t wear masks and because their employers often didn’t give them hazard pay for risking their lives day after day at work. Plus, many have been emboldened by the Fight for $15, Black Lives Matter and MeToo movements.

In recent months, it suddenly seems that there are really two labor movements. One is young and dynamic, growing rapidly. The other is older, richer, well-established and far larger, although often jaded. That established movement has tried year after year to halt labor’s decades-long slide, but it has failed, with some union leaders all but giving up and hardly doing any organizing. (Intense corporate resistance to unions usually makes it very hard for organized labor to expand.)

The new, youth-driven labor movement is busy being born — and eager to go from baby steps to running at full speed. But it is woefully underfunded, and in order to grow and reach its potential, it will need money, lawyers and expertise. The most likely source for that is the richer, older unions, but many of them are showing scant desire to help. Sometimes it seems these older unions are envious of the energetic, younger movement, and sometimes they don’t seem to know what to make of it. These young workers are doing things differently, often doing bottom-up, self-organizing of their workplaces, far different from organized labor’s traditional strategy of relying on unions’ paid staff organizers.

If the nation’s big unions and their leaders are serious about having the labor movement grow again, they need to realize that this is an unusually promising moment, that there’s huge energy right in front of them. The big unions have the money and resources to help the new youth-driven movement expand rapidly. If the big unions don’t jump in and help, then all their grandiose talk about reversing labor’s slide will ring hollow. This is the most promising moment for unions in decades, and if the big unions don’t come off the sidelines and help the youth-driven moment grow, they will have themselves to blame if labor’s decline continues.

Recent headlines, from the Jan. 6 committee’s hearings to the Supreme Court rolling back the right to reproductive health care, profoundly implicate the freedom that many will celebrate this Independence Day.

Even still — after more than half a dozen years of jaw-dropping behavior — Donald Trump has the capacity to shock.

Accosting a Secret Service agent. Pitching a fit and heaving his lunch plate against the wall. Risking...Read More

Donald Trump. His chief of staff, Mark Meadows. His closest advisers in the White House.

They knew about what could happen on Jan. 6. About how there was a real potential for violence if Proud Boys and Oath ...Read More

Independence Day is recognized across America as the day to celebrate freedom. As the popular song says, “I’m proud to be an American/Where at least I know I’m free.” Yet many people don’t feel terribly free. ...Read More

This month, workers at an Apple store in Maryland voted to unionize, another signal that the labor movement is gaining momentum at tech companies. This follows a victory at an Amazon Staten Island warehouse in March, the ...Read More