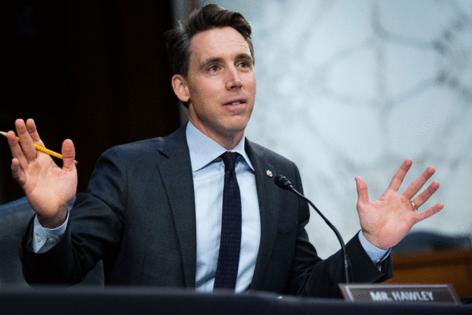 Once upon a time, it was the activist left that wanted to rip private property from private entities, and it was conservatives who sought to prevent such attacks on free enterprise. But that was when conservatives still believed in their own stated principles. Sen. Josh Hawley, R-Mo., has once again demonstrated how much he doesn’t. His legislation attempting to retroactively strip Disney of its own copyrights as punishment for criticizing Florida’s so-called “don’t say gay” law is not only legally and constitutionally ridiculous but should be philosophically repugnant to a party that once prided itself on standing against interference with free enterprise.

Hawley’s legislation would alter current U.S. patent law so that copyrights for intellectual material would last just 56 years from the time of their creation. Under current U.S. law, those patents are good for the lifetime of the creator of the property, plus 70 years after that person’s death. Not only would Hawley’s legislation dramatically reduce that standard, it would generally violate an international agreement, to which the U.S. is a signatory, that protects copyrights for the life of the creator plus 50 years.

As usual, Hawley presents his legislation as if it were something principled — in this case, the principle of returning U.S. copyright law to where it was until the late 20th century — in order to spur “innovation” by ending the mini-monopolies that long-term copyrights create.

There is fodder there for legitimate debate, but Hawley confirms this isn’t that debate in two ways: first, by specifying in the first line of his press release announcing the legislation that it is aimed at “woke corporations like Disney,” and, secondly, by making the provisions of the bill retroactive on the biggest companies (including Disney), immediately taking away currently owned copyrights with no due process. Legal experts say this would be tantamount to the government yanking away a private entity’s real estate or other property based on a law that wasn’t in effect when the company obtained the property. As Yale Law grad Hawley surely knows, it doesn’t work that way.

He knows, but he doesn’t care because his goal here isn’t to actually change copyright law. It’s to publicly bash Disney in order to get in on some of that right-wing cred that Ron DeSantis — Florida’s governor and one of Hawley’s rivals in his apparent presidential bid — has collected for his vindictive move to strip Disney’s special tax district as punishment for the company’s criticism of DeSantis’ law regulating classroom content. As cynical and obvious a violation of the First Amendment as DeSantis’ law was, it passed, which is more than Hawley can expect of his copyright bill.

But he can at least issue the press releases going after that dreaded woke mouse, Mickey. This being Hawley, everyone already understands that his whole enterprise is goofy.