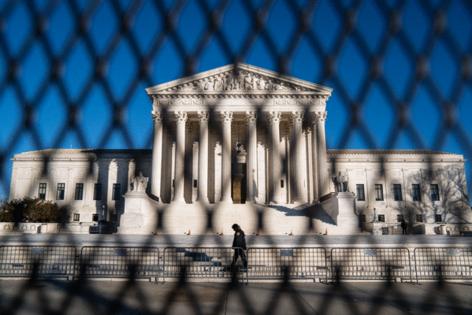 The breakdown of U.S. Supreme Court legitimacy may already have begun as the public perception of the court morphs from one of respectful observances of the law as interpreted by the nation’s top judicial scholars to a view of them as little more than political hacks in black robes. Various states, including Missouri, are on record openly defying Congress by effectively ignoring federal legislative mandates. It could be just a matter of time before defiance of the Supreme Court follows the same track.

Various states, including Missouri, already are openly sidestepping federal marijuana laws, legalizing use of the drug even though the federal government outlaws marijuana as a Schedule I drug equivalent to heroin, LSD and methamphetamine. A steady stream of states, starting with Colorado, decided to defy the federal government to the point where federal authorities make minimal efforts to enforce their own laws these days.

Missouri has taken its defiance a step further by asserting a right to forbid police from enforcing any federal gun laws that don’t have a companion Missouri state law. Missouri’s Second Amendment Protection Act has forced local police to cancel cooperative arrangements with federal agencies for fear of losing their state funding if they’re caught helping enforce any semblance of a federal gun law not recognized by Missouri.

This is how quickly federal authority can erode when states decide to go their own way. The U.S. Supreme Court and Congress might be only a few steps away from prompting similar defiance by states that refuse to recognize federal supremacy regarding abortion rights.

After a draft Supreme Court ruling leaked that could overturn abortion rights, Senate Republican leader Mitch McConnell stated that a Republican-controlled Congress might move to establish a federal ban on abortion. California is already working on a law that would protect anyone involved in an abortion from being extradited if charged in another state for an abortion offense.

“We can’t trust Scotus (the Supreme Court) to protect the right to abortion, so we’ll do it ourselves,” Democratic Gov. Gavin Newsom tweeted. “Women will remain protected here.”

The court’s politicization is no longer something justices can hide. The three most recent arrivals to the bench misled members of Congress by indicating they regarded Roe v. Wade as settled law, not to be overturned. Justice Clarence Thomas’ wife is an open supporter of former President Donald Trump and his efforts to subvert democracy.

The Supreme Court has no police force or military command to impose enforcement of its rulings. Until now, the deference that states have shown was entirely out of respect for the court’s place among the three branches of government. If states choose simply to ignore the court following a Roe reversal, justices will have only themselves to blame for the erosion of their stature in Americans’ minds.