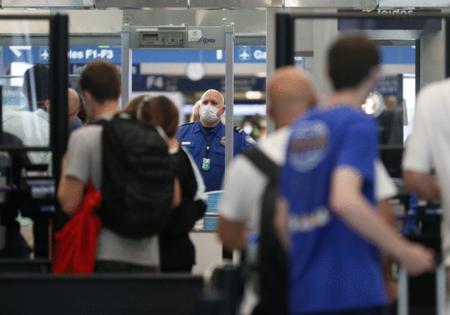 On April 18, a federal court judge ended the federal transportation face mask mandate, deeming it an overstep of Centers for Disease Control and Prevention authority. Almost immediately, airlines responded by making face masks on flights optional. The White House continues to urge travelers on all modes of transportation (air, rail and public transit) to continue to wear face masks to reduce virus transmission, particularly for those most vulnerable to developing a serious case of COVID-19.

At the national level, the seven-day moving average of new confirmed cases has increased by over 200% since it hit a low of just under 25,000 on March 29. With more people using at-home tests, the actual number of new infections is likely significantly higher.

But what about Transportation Security Administration officers at airport security checkpoints? How have they fared since the mask mandate ended?

Up until April 20, the TSA coronavirus website provided daily updates on the number of TSA officers who had become infected, the number of active cases and the number of deaths. The agency also provided a breakdown of confirmed cases at each commercial airport that it serves. After the federal mask mandate was struck down, the TSA ended this reporting.

Forbes recently published the story “TSA COVID Infections Have Jumped by 50% Since the Mask Mandate Was Lifted.” The data it reported, provided by a TSA spokesperson, indicates that the TSA continues to track COVID-19 infections but has just stopped publicly reporting it.

What this data suggests is that the increase in new TSA officer cases is consistent with, though moderately higher than, what is happening across the nation. Some of this can be explained by all TSA officer infections being detected, while what is occurring in the nation with at-home tests is flying “under the radar” of CDC public health tracking.

While the time during flights is safest for travelers, time spent in jet bridges during enplaning and in crowded airport concourses are when face masks offer the greatest risk reduction benefits. Even without a mandate, good judgment suggests that masks make sense.

So has the end of the federal mask mandate made air travel and other forms of travel riskier? The data is suggestive, but the small sample size makes it inconclusive. Until more time passes and more data is gathered, continuing to wear a face mask when traveling by air, rail and on public transportation makes sense.

Sheldon Jacobson is a professor of computer science at the University of Illinois at Urbana-Champaign.