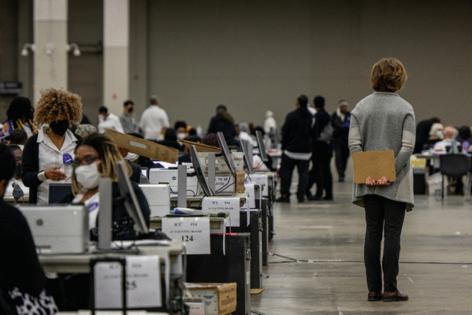 Both measures passed overwhelmingly in the Nov. 8 election. There is no possibility the recounts, which start Wednesday, will alter the outcome because they are not examining enough votes.

Proposal 2 won with 60% in support and 40% in opposition. The margin was about 861,000 votes. Jonathan Brater, Michigan's elections director, said the recount for Proposal 2 would cover about 38,000 yes votes.

Members of the board of canvassers, including Democrat Mary Ellen Gurewitz, said state law allows for recounts of ballot proposals even in instances when the recounts don't have a chance to alter the result.

"I think that this is, as we have recognized, a total waste of time, money, that this is imposing upon the counties, for no good reason at all, the obligation to go through all of this," Gurewitz told reporters. "I think that it shouldn't happen.

"I think that the statute should be amended so that it is clear that (a) good faith (belief) that this will affect the outcome of the election should be required for the recounts of ballot proposals, as it is for candidate recounts. But that is not what the statute currently provides."

The bipartisan Michigan Board of State Canvassers voted 3-0 on Monday to allow partial recounts of two ballot proposals to proceed after expressing reservations that the efforts amounted to a fishing expedition aimed at advancing unproven claims of election fraud.

Tony Daunt, a Republican member of the canvassing board, described the push for recounts as "frivolous" and "unnecessary." Daunt said he was concerned about the recount process "devolving into a circus" and individuals trying to use the effort in bad faith to issue subpoenas and pursue "forensic audit nonsense."

Conspiracy theories about voter fraud have gained the spotlight in Michigan since former President Donald Trump falsely claimed the 2020 election was stolen from him. Trump supporters analyzed election equipment and unsuccessfully pushed for a so-called "forensic audit" of Michigan's 2020 vote.