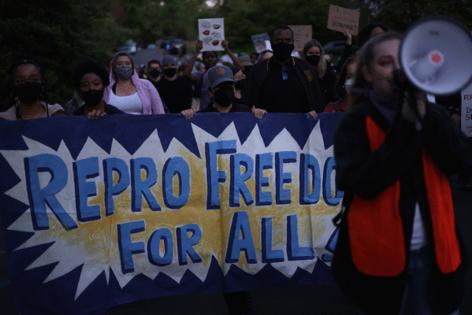 It’s easy to take for granted one of our country’s greatest strengths: a legal system in which we settle our disputes peacefully in court. We do this without the type of violence, intimidation and threats against judges that occur in too many other countries.

That was true until someone leaked a draft opinion from the Supreme Court a few weeks ago.

Now, even though the Supreme Court hasn’t even issued its official opinion in Dobbs v. Jackson Women’s Health Organization, pro-abortion protesters are gathering outside the homes of the five conservative justices who are assumed to be in the majority of the leaked draft. These crowds have engaged in illegal protests outside the homes of those justices each week since the leak, in clear violation of federal and state law.

So why aren’t Attorney General Merrick Garland and Steve Descano, the rogue state prosecutor of Fairfax County, Virginia, enforcing federal and state law to stop pro-abortion extremists invading the neighborhoods of Supreme Court justices in order to intimidate them — and their families — over the upcoming decision in Dobbs v. Jackson?

These foul-mouthed vulgarians have no regard for the law, civility or even human life. Their sentiments about the killing of unborn children are entirely captured by one of them saying “save the fetus, f— the child” at the home of Justice Amy Coney Barrett.

They protest every Thursday night at Barrett’s house and rotate from one conservative justice’s home to another throughout the week. There have also been protests at the Alexandria, Virginia, home of Justice Samuel Alito.

Imagine for just a moment that an important Second Amendment case was pending before the Supreme Court and a memo was leaked indicating that the liberal justices were poised to do what the progressive left has wanted the court to do for years: erase the Second Amendment from the Bill of Rights.

Picture gun-rights advocates showing up at the homes of Justices Sonia Sotomayor and Elena Kagan, shouting profanity-laced slogans, disrupting the peace of the neighborhood, and scaring the other families who live there.

In other words, acting just like the abortion protesters are now.

Does anyone doubt that they’d be immediately arrested (and properly so), and Garland and Descano would be arguing over who was going to prosecute them first? But because Garland and Descano agree with the political views of these protesters, they refuse to do anything to stop what they are doing — trying to impede, obstruct, intimidate, and influence Supreme Court justices doing their jobs.

Even Sen. Dick Durbin, D-Ill., says what’s happening is “reprehensible,” adding: “Stay away from the homes and families of election officials and members of the court.”

Durbin is right. A recent poll showed that 75 percent of those polled do not agree with publishing the homes addresses of the five Supreme Court justices, nor do they agree with the protests happening at their homes.

Federal law is quite clear. Under 18 U.S.C. § 1507, it is a criminal violation of federal law to picket or parade “near a building or residence occupied or used by [a federal] judge, juror, witness, or court officer” with the “intent of interfering with, obstructing, or impeding the administration of justice, or with the intent of influencing any judge, juror, witness, or court officer, in the discharge of his duty.”

While we have extensive First Amendment rights in this country to speak out, including criticizing decisions of federal courts, we do not have the right to try to abuse that freedom by trying to intimidate judges, jurors, and witnesses in ongoing cases to influence their decisions and their testimony.

Virginia law is clear also. Under § 18.2-419 of the Virginia Code, it is a criminal offense to engage in protests “before or about the residence or dwelling place of any individual … which disrupts or threatens to disrupt any individual’s right to tranquility in his home.” The law specifically allows protests at places “used for the discussion of subjects of general public interest,” thus making the same distinction that Durbin, to his credit, is making.

No one wants to restrict peaceful, civil protests in the public arena. But taking that to people’s homes, to their families, is an outrageous — and dangerous — abuse that should be stopped.

Hans A. von Spakovsky is a Senior Legal Fellow at The Heritage Foundation and a former Justice Department lawyer.

Recent headlines, from the Jan. 6 committee’s hearings to the Supreme Court rolling back the right to reproductive health care, profoundly implicate the freedom that many will celebrate this Independence Day.

Even still — after more than half a dozen years of jaw-dropping behavior — Donald Trump has the capacity to shock.

Accosting a Secret Service agent. Pitching a fit and heaving his lunch plate against the wall. Risking...Read More

Donald Trump. His chief of staff, Mark Meadows. His closest advisers in the White House.

They knew about what could happen on Jan. 6. About how there was a real potential for violence if Proud Boys and Oath ...Read More

Independence Day is recognized across America as the day to celebrate freedom. As the popular song says, “I’m proud to be an American/Where at least I know I’m free.” Yet many people don’t feel terribly free. ...Read More

This month, workers at an Apple store in Maryland voted to unionize, another signal that the labor movement is gaining momentum at tech companies. This follows a victory at an Amazon Staten Island warehouse in March, the ...Read More