Ballooning in Temecula: Love is in the Air 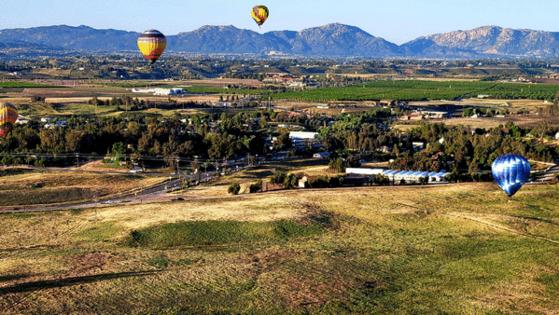 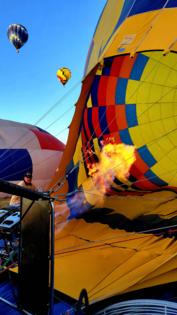 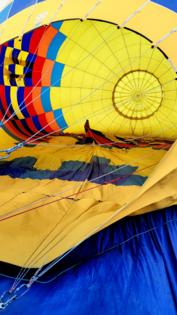 They were 200 feet above the ground, gliding over the vineyards, ranchlands and rooftops of the Temecula Valley in a hot-air balloon, when he summoned up his nerve and proposed. An hour later the newly engaged couple were back on the ground, all smiles, sipping Champagne. "She said yes!" he announced. Everyone applauded.

Eight balloons were in the air that morning, all brightly colored, ever so gently rising and falling and offering everyone on board spectacular vistas of rolling hills and distant mountain ranges to the east and west.

Though not everyone was aware of it, as hearty balloonists we were taking part in an aviation tradition that dates back all the way to the 1700s in Paris. So, it was only appropriate that as we rose into the sky and cast our gaze to the north, we could just make out the city of Perris, California.

Our leader that morning was Rusty Manning, a would-be commercial pilot who traded in his wings for the tourism possibilities of hot-air ballooning. After serving an apprenticeship during which he quite literally learned the ropes, in 1991 Manning bought his own balloon and launched A Grape Escape: Hot Air Balloon Adventure. Since then, he's made more than 10,000 ascents, including festival appearances at the helm of the Pachanga Casino and the Kellogg company's iconic Tony the Tiger balloon.

Manning's timing coincided with the growing popularity of the Temecula Valley Balloon & Wine Festival, which began in 1984. Scheduled for the first weekend in June at Lake Skinner -- about an hour east of Old Town Temecula -- the festival attracts up to 50,000 visitors who come to watch a fleet of 90 brilliantly colored balloons take to the sky. They can also dance to the pulsing beat of rock 'n' roll and sip offerings from Temecula's ever-growing number of wineries. And while most visitors will savor the spectacle from the ground, several companies, including Manning's, will be offering rides June 3-5.

Because wind conditions play such a critical role, most balloon adventures begin very early in the morning, sometimes before dawn. It's a remarkable process to watch as the great fabric balloons are spread out on the ground. Then, once they are unfurled, the jet burners that supply the heat are ignited with a roar. Slowly, as the hot air does its job, the balloons begin to inflate until they tower above the traditional wicker gondolas.

When everyone is safely positioned on board, it's time for the magic to begin -- that almost indistinguishable moment when lift-off occurs. Then it's up, up and away as you leave the ground farther and farther behind, soaring above trees and fields, wafting along on the breeze. Loud bursts of the burner give way to extended periods of silent, blissful soaring unlike any other form of flight.

The return to terra firma, on the other hand, can be a bit more challenging. Ideally balloon and basket sit down gently on a nice level spot of ground. But even the most skilled balloonist and ground crew are at the mercy of the winds. A sudden gust can take a balloon off course and cause the gondola and its passengers a bumpy landing. So, hold on!

That being said, flying in a beautiful balloon offers a rare opportunity to combine the exhilaration of a thrill ride with picturesque moments of pure serenity. Once you've done it, you'll probably be hooked. FYI: It's also an ideally romantic way to propose.