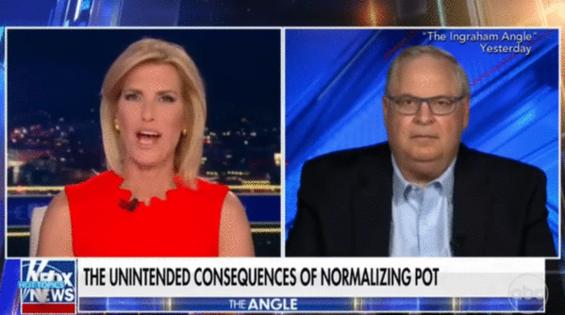 Here are just some reasons why Laura Ingraham’s statement is absolutely absurd, and none of them have to do with marijuana legalization.

We’re only halfway through the year, and there has been over 200 mass shootings all around the United States already.

The deadliest of these, the Uvalde school shooting targeting a fourth grade elementary class, was considered the worst since Sandy Hook. This is clearly a systemic problem within the United States, but Fox News host Laura Ingraham doesn’t think so: she made it clear that she’s anti-marijuana legalization by blaming the mass shootings on cannabis laws.

During her talk at The Ingraham Angle last week on Fox News, she said: “This is something that the medical community is well aware of. Yet, you get the sense that billions of dollars on the line are more important than our kids,” she said. “And what’s happening especially to young men in the United States, who are frequent users of the high-potency THC that’s now in marijuana products sold legally in dispensaries across the United States. I mean, this at the very least needs a serious national conversation.”

Yes, she said that.

We’re in shock that someone in this day and age still actually believes pot psychosis is a thing. I mean, that’s so Reefer Madness. Did Laura Ingraham get her research from watching the 1936 propaganda film and nothing more? Because that sounds like it, and she makes herself sound so detached from reality.

There are just so many ways her irrational statement didn’t have any legs.  She said that she heard about some vague reports the shooter was smoking weed, but Ingraham thinks that the issue really all lies in the legalization of marijuana and the lax laws surrounding it. Fact Check Here are just some reasons why Laura Ingraham’s statement is absolutely absurd. Leave marijuana legalization out of it! Lax gun laws: According to the Small Arms Survey as reported by BBC, back in 2018 there were around 390 million firearms circulating in the United States, making the ratio of gun ownership 120.5 guns for every 100 residents. The report also states that gun ownership has increased significantly in the last few years, resulting in 11 million people exposed to guns within their homes. In addition, the Small Arms Survey states that Americans are the #1 country whose citizens own guns. And Harvard researchers correlate this with their findings that when this many people own guns in a developed country, this will lead to many more gun homicides. And of course so many Americans own guns – it’s far too easy to get your hands on one! No matter where you live, you will come across dozens, maybe even hundreds of shops that sell guns. There are gun shows that take place almost every weekend, and you can buy a gun from a friend or family member.

Only store gun purchases require a background check, if any. That’s where firearm buyers have to fill out a form either from the ATF or the Bureau of Alcohol, Tobacco, Firearms, and Explosives. Such a background check only takes a few minutes and denials for gun ownership are rare. In fact, cannabis users can’t even own guns.

However, there are states with stricter gun laws such as in Washington DC, Chicago, and New York. Marijuana legalization has been linked to a reduction in violent crime: There have been several studies documenting how legalizing marijuana has led to a reduction in violent crime rates. In one study in June 2020 conducted by the National Institute of Justice on the Effects of Marijuana Legalization on Law Enforcement, they said that “legalization has apparently coincided with an increase in crime clearance rates in several areas, suggesting that legalization may result in a net positive redistribution in police human resource allocation. In addition, fewer persons are being processed by the criminal justice system on nonviolent marijuana possession offenses.” In Washington State, for example, the Drug Policy Alliance reports that since they have legalized marijuana in 2012, there has been a reduction in violent crime rates while overall crime rates have stayed at a 40-year low. The National Incident-Based Reporting System also says that violent crime continues to significantly decrease in Washington. Shooter profiling: Scientific American released a profiling compiled by criminologists, looking at the life histories of mass shooters in the United States. Entitled, The Violence Project, one can find similarities among the shooters, and there is nothing that points to cannabis use. Some notable points here are the fact that almost half of all the shooters were able to get their guns legally from a licensed dealer, private sale, or other form of legal means while others borrowed guns and the rest have unknown origins. The Violence Project also identified that the most common motivation for the mass shootings was psychosis, which is a type of mental disorder wherein the person can no longer identify what’s real or what isn’t. They also tend to have difficulties with employment, interpersonal conflict with family, friends, or coworkers. More than half of the shooters already had a criminal record, while a great deal of them suffered from a history of trauma or had some form of domestic abuse.

These are the facts, and there’s nothing that links to marijuana use, not even close. Sure, individuals with psychosis shouldn’t use cannabis, but that isn’t even discussed in the profiling. The two issues here are strikingly clear and worrisome: our gun laws are far too lax, while psychiatric care is declining rapidly. Given that the average age of shooters is 18, we need to start paying closer attention to the children we’re raising, look for cues, and find a way to stop exposing them to guns.

Current studies on marijuana for cancer are hopeful, and patients who want to explore using cannabis for cancer are recommended to talk to their doctors.