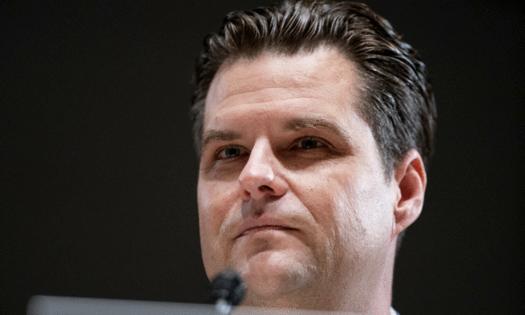 “Joe Biden, where are you at? The House has passed legislation. That’s one of your presidential demands, and it’s headed to a death in the Senate,” said the Congressman.

Rep. Matt Gaetz (R) from Florida, called President Joe Biden a “recalcitrant boomer” criticizing him over the lack of marijuana reform, a policy change that he campaigned on, reported Marijuana Moment.

The Congressman made the ageist comments during an episode of his podcast “Firebrand.” He contrasted his stance toward legalization against that of President Biden.

Gaetz boasted that he was one of just three Republican members of the House who voted in favor of a Democratic-led bill to end federal cannabis prohibition, while Biden opposes adult-use marijuana legalization.

“[The] real issue here is Joe Biden’s betrayal on marijuana,” he said, in reference to Biden’s campaign promise to expunge records and decriminalize cannabis.

“Joe Biden, where are you at? The House has passed legislation. That’s one of your presidential demands, and it’s headed to a death in the Senate,” he added. “I’m here to remind you and [Vice President Kamala Harris]: you’re missing a critical moment for a policy accomplishment. Do what you said you would do and, by the stroke of the president’s pen, we could have substantial marijuana reform in this country.” ‘Bad News For Big Pharma’ Gaetz also referred to a study that found a relationship between adult-use legalization in states and a decrease in the use of prescription drugs. “Bad news for Big Pharma,” he said.

“In Florida, we stand to benefit from streamlined research grants at a large scale to learn more and help more people unlock potential. However, the conclusion of this study is that recreational cannabis use is weaning people off of prescription drugs—it’s just hard to ignore,” Gaetz added. “Unfortunately, there’s this tumultuous road ahead, even with legitimate research and factual basis and evidence at hand. The cultural stigma hangover of the Boomer era weighs heavy.”

Major food brands are worried about weed edibles copying their packaging. And they’re taking the matter to Congress.

Accidentally ingesting cannabis has become an increasing occurrence in children. Aside from the fact...Read More

A new study finds a link between cardiovascular disease and cannabis. Researchers provide a helpful solution.

A large study conducted by researchers from Stanford Medicine found that cannabis users have a higher risk of...Read More

Biden administration officials said they’re “very aware that there are other Americans held in Russia,” and added that Whelan and Griner are “very much in our minds.”

Another bill that would have set up an adult-use market run by the state’s Liquor Commission was also defeated by the Senate.