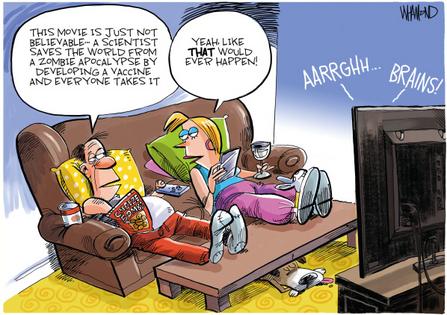 Seventy years ago, in response to a fantastical-but-true event on the ball field, sportswriter Red Smith wrote: “The art of fiction is dead. Reality has strangled invention.”

Indeed there are times, as we all know, when life imitates art imitates life. But this week nothing can top the twisty absurdism of the true tale that bonds Larry David with his ex-TV wife and Robert F. Kennedy Jr. It’s a tale I find worth telling, if only because I yearn not to write today about the usual downers, like encroaching fascism and Russian troop movements.

Nevertheless, if you do want some downer material, stay tuned. Because I can offer you Robert F. Kennedy Jr.

For those of you who haven’t seen the 11 seasons of "Curb Your Enthusiasm," here’s the gist: Seinfeld creator Larry David, playing a curmudgeonly character named Larry David, is relentlessly punished, in big and small ways, for his various meddlings, inactions, and passive aggressive actions. The Jerusalem Post newspaper approvingly points out, “Curb Your Enthusiasm has always been a Jewy show,” operating on the Yiddish principle middah k’neged middah – which roughly translates to “what goes around comes around.” As our star would say, he gets “prit-tayy…prit-ayy” pissed.

Jewish themes and tropes predominate, moreso than ever. Larry, as “Larry,” detests Trumpists and anti-Semites, and he’s obsessed with the Holocaust. This past season, when a Klansman comes to his house, ticked off that Larry’s friend Susie had sewn a Star of David on his Klan robe, Larry alerts the neighborhood by blowing the Rosh Hashanah shofar from his balcony. That’s all consistent with some of the stuff he produced on "Seinfeld," like the episode when Jerry and George got stuck in a limo with two Nazis who said the Holocaust was a hoax.

Anyway, in our real-life Curb episode, real Larry and the real actress Cheryl Hines, who was pretend-married to “Larry” on the show until they pretend-divorced, were both guests at a real wedding in 2012. At that wedding, Larry introduced Cheryl to another guest, RFK Jr. (one of the slain RFK’s 11 children). The two hit off. Cheryl nicknamed him “my Cutie Booby Bobby.” They got hitched in 2014.

Fast forward to last Sunday, when people who refuse to get vaccinated – people dedicated to the further spread of the virus and its variants – gathered for a rally in Washington. RFK Jr. was a prominent speaker. Suffice it to say, statistically speaking, that in a family of 11 children, there was bound to be at least one nutcase. Precisely the kind that makes Larry’s head spin.

This particular Kennedy is part of the crowd that somehow equates vaccine mandates (that are designed to save people’s lives) with Nazis (whose Holocaust snuffed six million lives).

On Sunday, Kennedy posited the notion that in today’s America, we’re all worse off than Anne Frank. The vaxxers, he said, are using satellites and 5G mobile networks to create a massive surveillance network that will ferret out anyone refusing to get vaxxed. In his words, “None of us can run and none of us can hide…Even in Hitler’s Germany, you could hide in the attic like Anne Frank did.”

Well. I suspect that Anne Frank’s family could’ve enlighten Kennedy about a few things, had they not all died in Nazi camps. As the Auschwitz Memorial tweeted yesterday, exploiting the deaths of people who perished in the Nazi epidemic “is a sad symptom of moral and intellectual decay.”