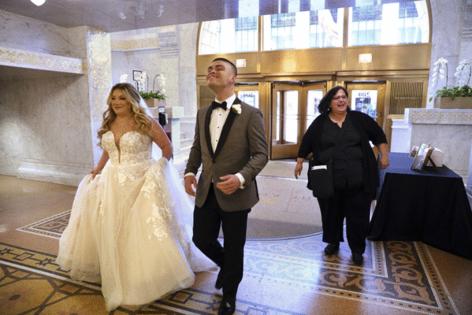 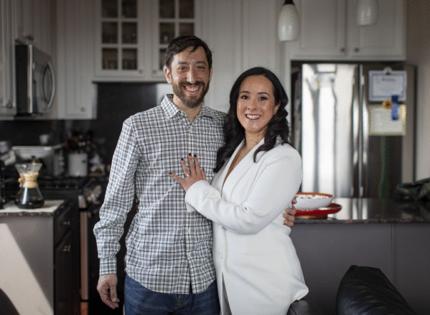 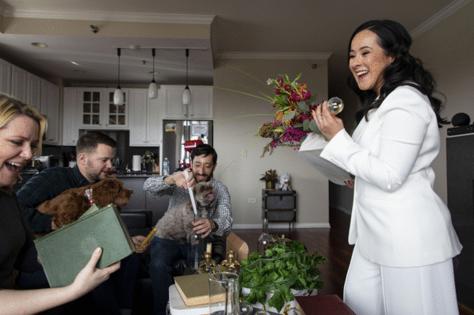 CHICAGO -- When Evan Cooperman and Rachel Ambrozewski got engaged in October 2019, in true Chicago style, the couple made no little plans: an elopement to a resort in Bali in June 2020, followed by a stateside wedding at the Michelin-starred, and now shuttered, Band of Bohemia.

But with the arrival of the COVID-19 pandemic in March 2020, just months after Cooperman’s proposal at a Halloween party, the frightening trajectory of the virus abruptly derailed the couple’s original wedding plans, forcing them to postpone their celebration for two years.

“It was almost like planning four weddings, so it’s been crazy,” said Ambrozewski , 36, and a researcher.

“Thankfully, everything was insured, so God willing, our wedding is June 18, with the theme of ‘Bali in Chicago,’ which is a nod to the original plan,” Ambrozewski said.

The couple, who were married before a judge at City Hall in July 2021, followed by a “micro-wedding” at Salvage One, will have their “big wedding” June 18 at NoMi Kitchen in the Park Hyatt Chicago, she said.

“Yes, plans can change, but our overall vision is being honored,” Ambrozewski said.

With most COVID-19 restrictions lifted in Chicago and much of the U.S., those who postponed their dream wedding celebrations as well as a contingent of newly engaged couples have led to a surge in demand for wedding-related businesses.

But while the wedding industry is welcoming the uptick in couples seeking caterers, florists and pastry chefs for wedding celebrations this year, soaring inflation rates and steep worker shortages are making the resurgence of business bittersweet.

Brisk said of the 32 weddings she had booked pre-pandemic, she had one cancellation, two “micro-weddings” and 29 weddings “that were rescheduled at least once.”

We have all heard that if you talk to yourself, you’re "crazy," but that’s not always the case. According to an article published by the American Psychological Association, talking to yourself in a positive way is ...Read More

Sometimes writing your online dating profile feels like you’re trying to crack a code. How do you encapsulate that you’re outgoing but equally content with a Saturday night reading a good book, or that you’re ...Read More

When life hands me lemons, I do try to make lemonade, but when it hands me negative people, I usually make my way to the nearest exit. I deal with real pain in people every day. Others who ...Read More

I just started watching "Ted Lasso" the other day. (I know I’m behind the ball on this one… and by the time this article is published, I will have binged both seasons!) As strange as it sounds to compare my job as a ...Read More

The wonderful multi-award-winning producer, writer and director Norman Lear was being interviewed by Jimmy Fallon. Jimmy asked Lear, now 99 years old, what advice he would give to younger people.

Without missing a beat, ...Read More

Life is not an elevator. It is stairs all the way, and sometimes you go up a few and then back one or two. It’s one of the things we humans all have in common. You may think you can name people who are so happy they’re...Read More