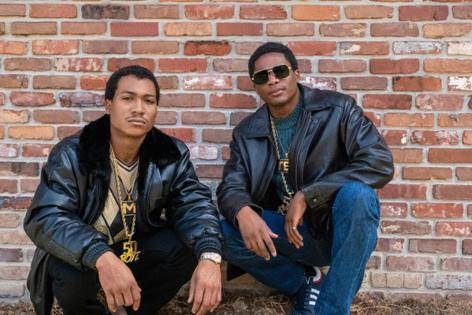 MIAMI — Lil Meech, an actor and rapper who gained fame under the tutelage of Hip Hop megastar 50 Cent, was arrested last weekend for his part in a convoluted scheme to steal hundreds of thousands of dollars worth of watches, police said.

Police say that Lil Meech, whose real name is Demetrius Flenory Jr., didn’t honor an agreed-upon $200,000 payment for one expensive watch — then used the guise of a GQ photo shoot to persuade a downtown Miami jeweler to lend him a $275,000 Richard Mille Roberto Mancini edition watch on consignment, before trading it to another jeweler.

Then, police said, when they reached Lil Meech and asked the 22-year-old to turn himself in, he hung up the phone.

“So we wrote up a warrant,” said Miami Police Spokesman Michael Vega.

Some time before May 14, the warrant was served and on that day Lil Meech turned himself in at the Turner Guilford Knight correctional center. He’s been charged with two counts of first-degree grand theft and organized scheme to defraud. All are felonies. His bond was set at $150,000. As of Wednesday, Lil Meech, who lives in Hollywood, Florida, was no longer in jail.

Lil Meech gained popularity in 2021 when 50 Cent, whose real name is Curtis Jackson, agreed to produce a movie with Lil Meech in the lead role on the Starz network. The young rapper’s role: Chronicling the exploits of his drug kingpin father and his subsequent incarceration for his part in the Black Mafia Family drug syndicate. Demetrius “Big Meech” Flenory, a founder of BMF in the mid 1980s in Detroit, was sentenced to 30 years in prison in 1985 for laundering drug money through BMF Entertainment.

Since starring in BMF, Lil Meech has guest starred in shows like HBO’s Euphoria. With 1.7 million followers on Instagram, he’s also emerged as a social media sensation.

Police say the actions that led to his arrest on Saturday began Feb. 4, when he visited Haimov Jewelers on Northeast First Street. There, he met with store owner Moshe Haimov, who agreed to sell him the $275,000 Richard Mille watch on conditions: Lil Meech traded him an $80,00 Rolex and agreed to subsequent $100,000 payments in March and April.

Police said Lil Meech was back at the store on Valentine’s Day, Feb. 14. This time, he asked Haimov to repair the watch he was buying, because it was missing some stones. Haimov also agreed during the visit to lend Lil Meech an even more expensive watch on consignment, also a Richard Mille, but a $350,000 Mexico edition.

Police added that Lil Meech said he needed the watch for an upcoming GQ photo shoot and that he signed a memorandum agreeing to return it within three days. He never showed. Just two weeks later, police said, he visited a competing jeweler at Timepiece Trading, where he asked the jeweler to assess the value of the watch given to him by Haimov.

That jeweler, police said, then agreed to trade Lil Meech a Richard Mille Yohan Blake edition — straight up for the $350,000 he borrowed on consignment.

The next day Haimov made a startling discovery while viewing Timpiece’s Instagram page when he noticed Lil Meech in the store, police said. Haimov called authorities, who reached out to Flenory Jr.

Haimov did not return two phone calls Wednesday. Lil Meech nor any of his representatives could be reached for comment.