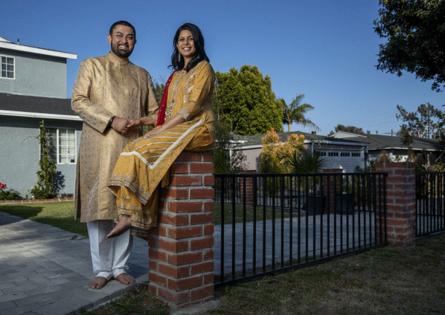 LOS ANGELES — Most swiping for love on a dating app know the drill.

The dating app Mirchi presents another possibility: "Auntie made me sign up."

The option is part joke, part knowing nod to its audience. Unlike the mainstream apps such as Tinder or Bumble, Mirchi is among the growing world of dating apps created by and catering to South Asians. More than 5 million people of South Asian descent — from India, Pakistan, Bangladesh, Sri Lanka, Bhutan, Nepal and the Maldives — call the U.S. home, mostly on the West and East coasts.

For many children of South Asian immigrants, the apps offer a practical tool to navigate the winding paths of love for their cultures, love for their families and finding the loves of their lives.

Mirchi, which means "spice" in multiple South Asian languages, launched in 2020 in Los Angeles. Before Mirchi, there was Dil Mil, which launched in 2014 in San Francisco. Dil Mil translates to "hearts meet."

The platforms feature drop-down lists attempting to capture and categorize the immense diversity of South Asia, offering check boxes for Tamil, Bengali, Gujarati, Punjabi (the list goes on). They ask about religion too: Hindu, Muslim, Sikh, Jain (the list, again, goes on).

It's through such questions that Sumitra Tatapudy found love.

Tatapudy grew up living between Mumbai and San Jose. The 31-year-old's parents, like many South Asian immigrants, had an arranged marriage. The process of arranging a marriage varies, but generally, it means that your parents or relatives help pick your life partner.

After dipping her feet in the arranged marriage process, Tatapudy couldn't dive in. "I realized on a call with a guy from an arranged marriage setting that it was going to be very hard for me to determine when we say yes. Like, at what point?" she said. "If our goal is not to just somehow fall in love, then how do you know?"

Online dating seems like the most obvious way to meet a potential partner — after all, how many singles (who are ready to mingle, of course) do you know who don’t have at least one dating app on their phone?

There are thousands of ways to keep your relationship interesting, but I’ll only give you a few special ones that will not only make your partner feel loved, but also make you proud of your efforts. The more you put into...Read More

Whether it’s at work, in our personal lives, or even something as specific as going to the gym, we all experience burnout from time to time. Why would the world of online dating be an exception to the rule?

When you wake up with a chest full of anxiety, it does not bode well for what the rest of the day will bring. But there are a multitude of ways to help relieve your anxiety and maybe even put it away for good.

Many of ...Read More

There’s nothing like a first impression — and in the online dating world, that means your photo and your bio. Admittedly, the photos are the first thing most people look at, but for the purposes of this article, let’...Read More

Last month I said no to an offer from a publisher, and I didn’t know if I’d ever get another one. That didn’t sit well, but I had other things to do, so I let it be and did my positive self-talk: You’ll be fine no ...Read More