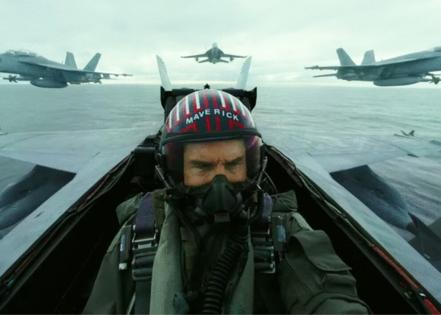 If it succeeds in drawing moviegoers into theaters, 2022 might well be on its way to a throwback summer season approaching pre-COVID 2019 box office action. Is that a pipe dream? Are people ready? The last couple of years have replaced our need for speed with a plea for caution, however ignored. And caution is something the “Top Gun” ethos does not recognize.

Two years is a long time to wait for landing clearance, but “Top Gun: Maverick” finally hits the runway in time for Memorial Day weekend. Sneak previews of the film returning Tom Cruise to the role of (now) Capt. Pete “Maverick” Mitchell, back in action and bucking authority left and right, have been received with a mixture of relief and rapture.

“The typical crowd of somnambulists at CinemaCon in Las Vegas are notoriously tough,” said IMDb.com senior editor Keith Simanton the other week. “So it’s remarkable that when shown ‘Top Gun: Maverick’ they applauded four times during the movie. During it. It’s going to be a massive hit.”

After that, can “Jurassic World Dominion” continue the streak?

Will “Thor: Love and Thunder” find enough that’s witty and exciting to sustain its thankfully off-center patch of the Marvel Cinematic Universe?

Is it possible for Jordan Peele, who found a huge audience with “Get Out” and then repeated the trick with a far trickier original, “Us,” to complete his trifecta with the alien-intrusion thriller “Nope”?

We’ll answer these questions soon enough. Meantime, here are 10 movies to watch, and I say that having watched none of them.

Release dates are subject to change.

“Top Gun: Maverick” (May 27): When Paul Newman returned to the role of “Fast Eddie” Felson in “The Color of Money,” the year was 1986 and a quarter-century had passed since “The Hustler.” Also in 1986, “Top Gun” proved that Tom Cruise, Newman’s “Color of Money” co-star, was a bona fide international box office attraction. But 25 years is nothing, compared with the 36-year gap between “Top Gun” and director Joseph Kosinski’s follow-up. Cruise now takes the mentor-with-an-edge role; co-starring Miles Teller (as the ill-fated Goose’s son), Jennifer Connelly, Jon Hamm and Val “Iceman” Kilmer.