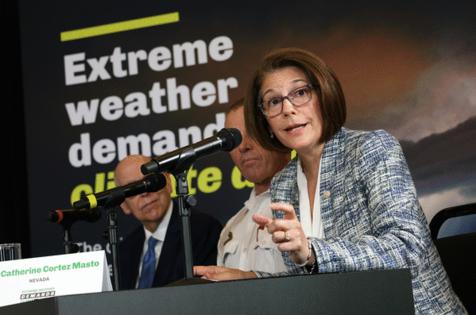 Sen. Catherine Cortez Masto, a Nevada Democrat, ensured her party will keep control of the Senate after she defeated Republican Adam Laxalt, the state’s former attorney general, on Saturday.

Regaining the chamber was “a resounding endorsement of Democrats’ Senate majority,” said Michigan Sen. Gary Peters, chair of the Senate Democratic campaign arm, in a statement on Saturday. “These historic results in race after race speak for themselves, and they reflect the strength of our candidates, the popularity of Senate Democrats’ message to the American people, and a rejection of the extremism espoused by the GOP.”

Democrats will have the opportunity to build on their majority next month in Georgia, when Sen. Raphael Warnock faces off against GOP challenger Herschel Walker. Warnock narrowly outran Walker in the general election. But he failed to surpass 50% of the vote, forcing a runoff under state law.

Walker ran 5 percentage points behind Gov. Brian Kemp, a fellow Republican who made a successful reelection bid — pointing to a significant number of voters who backed the incumbent governor but not Walker.

Now that control of the Senate has been determined, it may be difficult for Walker to rally those voters to show up, said Jessica Taylor, a Senate campaign analyst with the nonpartisan Cook Political Report with Amy Walter.

“It’s a turnout game, and Republicans failed the turnout game last time because (then-President) Trump was trying to overturn the election results,” Taylor said, pointing to the GOP’s loss of two Senate runoffs in Georgia after the 2020 election.

Trump is poised to loom over the upcoming runoff as well, teasing a possible announcement for a 2024 presidential run next week.

President Joe Biden, with his party holding the Senate, preserves his ability to confirm judicial nominees and Cabinet secretaries.

Should Alec Baldwin have been charged with involuntary manslaughter in the shooting death of the cinematographer on the movie set of "Rust"?

To answer that question, you need to know what he knew or should have known at...Read More