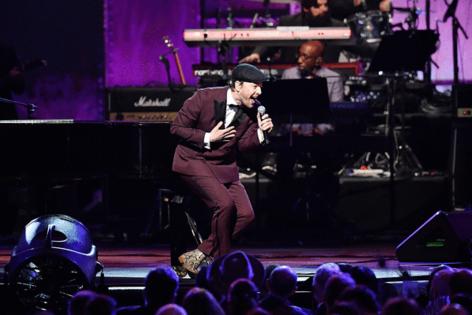 NEW YORK — Gavin DeGraw wanted to make sure his father could hear his most personal music yet.

The Grammy-nominated singer-songwriter from upstate New York recorded his latest album, “Face the River,” as a tribute to his mother, Lynne, who died in 2017 of pancreatic cancer, and his father, Wayne, who died nearly three years later after a short illness.

DeGraw, 45, says it was “a race against time” to finish the album before his dad’s death. He remembers the first time he was able to share three of the songs with his father, including the album’s poignant title track.

“The first song I played him was ‘Face the River’ and he immediately started tearing up when he heard me hit the first high note,” DeGraw told the Daily News. “I remember him saying, ‘I wish your mother could have heard this.’

The 10-song “Face the River,” out Friday, is the seventh studio album by DeGraw, who grew up in South Fallsburg in the Catskill Mountains, about 90 miles northwest of Manhattan. He says it honors his hardworking family, whom he describes as his “real-life, everyday heroes who don’t get celebrated enough.”

Several weeks after sharing those first three songs, DeGraw played the album in its entirety for his dad, who had returned home from the hospital.

“Listened to the whole thing, top to bottom, and my brother and I left the place, and a half-hour later the phone rang, and he had a medical emergency,” DeGraw recalled.

The release of “Face the River” comes nearly two decades after DeGraw’s breakthrough debut album, 2003′s “Chariot,” which went platinum and yielded the mega-hit song “I Don’t Want To Be.”