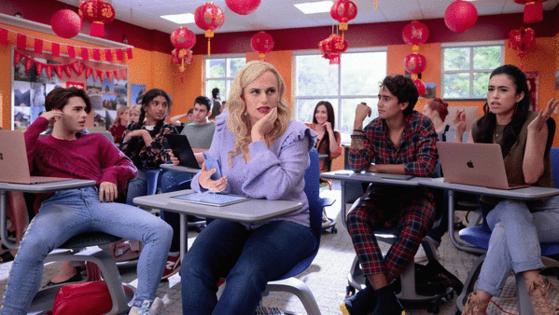 Is there nostalgia for 2002? Netflix comedy “Senior Year” certainly tries.

The movie doesn’t waste time setting up the premise: Rebel Wilson plays Stephanie Conway, who wakes up after a 20-year coma after an unfortunate cheerleading accident in 2002 to the Kelly Clarkson song “A Moment Like This.”

Stephanie, now 37, returns to high school to make up for what she missed and like a modern Rip Van Winkle, has to learn about smartphones, social media and avoiding use of the word “retarded.” She decides to revisit old goals: become cheer captain and prom queen. Problem: no one person is cheer “captain” anymore and nobody is “prom queen” because such competitions have been eliminated. And instead of sexy dance routines to Nelly’s “Hot in Herre,” the squad does overly earnest “cheers” about “consent” and climate change.

“I had more fun in a coma,” Stephanie says to the principal, who conveniently was her friend in high school.

“Senior Year” is largely a vehicle for Wilson, best known for her roles in the “Pitch Perfect” movies and rom-com “Isn’t It Romantic,” to make comedically dated early 2000s “bomb diggity” pop culture references and dance like she’s in a Britney Spears video. Nobody will mistake this movie as anything but a gentle, lighthearted goof.

“The premise is mildly ridiculous,” said Alex Hardcastle, the director who has an extensive resume of directing TV shows ranging from “New Girl” to “The Mindy Project” to “The Office” to “Grace & Frankie.” “What we tried to do is ground it in reality as much as possible. Find a lot of heart and a really positive message. It shows how much we’ve progressed since 2002. It’s basically a celebration of individuality.”

He said the movie “speaks to how sophisticated high school students are these days. They are open to expressions of different sexualities, different genders.”

The movie is dotted with familiar faces like Justin Hartley (”This is Us”), who plays her former high school squeeze; Sam Richardson (”The Afterparty”), her current day love interest; Zoë Chao (also, “The Afterparty”), her rival; Chris Parnell (”Saturday Night Live”), her dad; and Alicia Silverstone, whose “Clueless” poster pops up in Stephanie’s bedroom, the 2002 prom queen whose life didn’t quite turn out as planned by 2022.

Hardcastle is thrilled that Netflix has been supportive of mid-budget comedies like this that rarely pop up in movie theaters anymore.

“I hope people can see this movie was made from a place of love,” he said. “It’s very uncynical and sweet. And Rebel is a force of nature!”