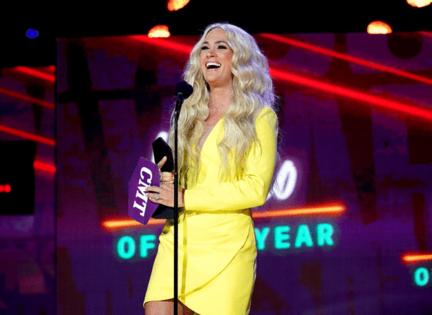 Carrie Underwood is embarking on her latest arena tour covering 43 cities starting this fall into the winter.

Dubbed “The Denim & Rhinestones Tour,” this will be her seventh major tour since she won “American Idol” in 2005.

Tickets for all the tour dates will go on sale Friday at 10 a.m. with Ticketmaster. Ticket prices have not been released yet.

She appeared on “American Idol” Sunday night as a mentor and will be performing this Sunday during the series finale. Her current single “Ghost Story” is now No. 23 on the overall Billboard country charts and No. 27 on the airplay chart. Her new album “Denim & Rhinestones” will be out June 10.

Underwood is currently doing a residency in Las Vegas at the Resorts World Theatre that runs through Saturday.

The all-new production will be directed by Barry Lather, who has done concert tours in the past with Rihanna, Mariah Carey and Michael Jackson. Based on past concert tours, Underwood likes to go big with lights, big set pieces and numerous costume changes.

Here are the tour dates:

When the aliens finally invade, they will find the vestiges of our Minions-based civilization and wonder just what the hell happened here. Having lived through it, I could not possibly begin to explain just how these hot ...Read More

LOS ANGELES — Oh. Em. Gee. The “Barbie” movie doesn’t come out until next summer, but people are already freaking out while the Warner Bros. feature — starring Margot Robbie as Barbie and Ryan Gosling as Ken — ...Read More

The top 10 DVD rentals at Redbox kiosks for the week of June 20: