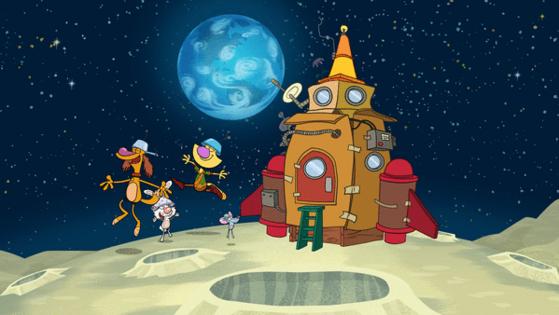 A cat, a mouse, a bunny and a dog skipping through nature, exploring hiking trails and helping out other animals along the way may not seem like a show that would fit with the often snarky and sarcastic tone of cast members from "Saturday Night Live."

But "Nature Cat," an earnest show that is part of PBS Kids' "Explore the Outdoors" lineup, enlists some of the funniest people on TV to play straight-edged cartoon characters trying to solve problems out in the environment. Nature Cat or Fred the cat (Taran Killam) goes on adventures with his friends Hal the dog (Bobby Moynihan), Daisy the bunny (Kate Micucci) and Squeeks the mouse (Kate McKinnon). Other longtime "SNL" members who've lent voices to the show include Kenan Thompson, Bobby Lee and Chris Parnell.

What's going on here? There's obviously some kind of talent pipeline from "SNL" to the show, which recently launched a week of new episodes. Adam and David Rudman, co-creators of "Nature Cat" alongside Todd Hannert, are the producers who seemed most keen to pluck their cast from the show's roster . Moynihan remembers them asking for opinions on who could come aboard to help as voice actors, and he rattled off a number of performers from the late night staple. Killam recognized that the "brothers Rudman" were on to something.

"Part of their genius in casting from 'SNL' — [and people like] Kate Micucci [have] been a good friend of mine since before doing 'SNL' — is they sort of cast people that have a similar rhythm and tone. They come from a similar world," says Killam. "So even if we're not recording in the same room together, what we're laying down is a similar enough vibe that they meld together."

"Working with these guys in any capacity is the best," says Moynihan. "Kate Micucci is like my entertainment little sister. She was in the first movie I ever did."

For Micucci, one of the few actors who wasn't on "SNL" but knows many of the cast, it's an opportunity to work with friends.

Killam, Moynihan and Micucci have each done extensive voice work, with Moynihan and Micucci even working together on "Duck Tales." Elastic voices in comedy almost seems like a must, but for these improv champs, it's the freedom of expression that they are drawn to and excel in.

"With 'SNL' most of the time, you get one shot. That's the beauty and the beast of it. With voiceover work, and specifically with 'Nature Cat,' we're encouraged to explore and to try a lot of things and throw in ad libs. David and Adam are incredibly collaborative in that way," says Killam.

"I think it says a lot to David and Adam Rudman because they're really into improvisation," says Micucci. "Our recording sessions are always really fun and comfy."