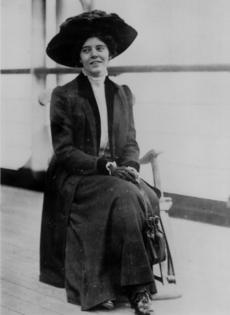 She wants to lead an unprecedented women’s march on Washington! She wants a federal amendment to give women the right to vote! Take it slow, the old guard says. Alice the upstart just rolls her eyes.

“Why does no one understand what I have planned?” our impatient heroine sings.

“I’ll be the one to finish the fight!”

In real life and in the play, South Jersey’s own Alice Paul didn’t get to finish her fight. No one else has, either. The Equal Rights Amendment (ERA), which Paul helped to write, has yet to become reality. The 19th Amendment, which gave women the right to vote and which she was a leader in the fight for, was to Paul just a means to her true goal — equality for women under the law. She spent the rest of her life working for that until she died in 1977 at age 92 in a Moorestown, New Jersey, nursing home. She is buried in Cinnaminson, New Jersey.

But Paul and the women who fought with her did achieve major legal and social change — not only for women, but in the ways political activism would be waged by many other activists going forward.

In fact, Paul and her fellow suffragists might just be the most important Americans you’ve never heard of.

And yet these women inspired playwright and performer Shaina Taub, who plays Paul, to create a major production that opened in the same theater where "Hamilton" got its start. The show was long ago sold out for its entire until-end-of-May run.

“While the show is closing at The Public after a triumphant run here on May 29th,” said a Public Theatre representative, “we value our collaboration with the commercial producers for this production who hope to usher the show forward beyond this run.”

If that happens, Paul may finally take her place among our history’s more familiar figures.