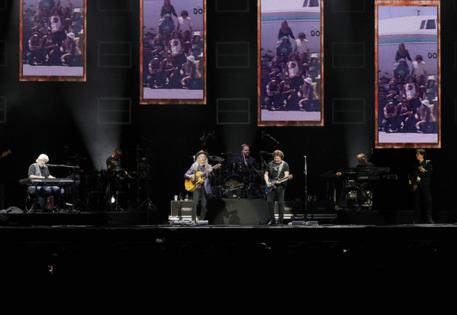 LOS ANGELES — When it finally happened last summer, the Doobie Brothers' long-anticipated reunion with Michael McDonald took just more than a week to run into trouble.

Nine days after they kicked off a tour marking the California group's 50th anniversary — a year late due to a pandemic-forced delay in 2020 — McDonald tested positive for the coronavirus and had to pull out of a performance at the Minnesota State Fair with just hours until showtime.

"The mistake I made was thinking I could go out to eat once in a while," recalled the white-haired crooner, whose bandmates went ahead without him that night before calling off a handful of subsequent gigs while they waited for McDonald to recover.

So you could understand why the once-freewheeling Doobies, all vaxxed and boosted and in their early 70s, were running a pretty tight ship the other day at a North Hollywood rehearsal studio as they prepared to hit the road again — first for a two-week Las Vegas residency set to open Friday at Planet Hollywood, then for the remaining 42 dates of the anniversary tour, the group's first official outing with McDonald since the mid-1990s. Signs taped to the walls ordered any non-Doobie to wear a mask at all times; a burly crew member was quick to deliver the message aloud to anyone who appeared to need reminding.

Do these safety measures threaten to kill the fun of touring, at least as compared to the group's '70s heyday, when the musicians traveled in a bar-equipped plane called the DoobieLiner? "Yes," guitarist Pat Simmons replied immediately. (Once they start playing concerts this month, the bubble will tighten further, according to their manager, with no guests allowed backstage.) Asked how they plan to amuse themselves, Simmons deadpanned: "DoorDash."

"But you just have to deal with reality," the guitarist continued. "It ain't perfect. Who cares? We're here, you know? So f— it."

"That's a good phrase," Tom Johnston, who splits lead vocals with McDonald, told Simmons with a laugh. "I like that. Covers everything."

Even with a COVID-19 compliance officer on staff, the Vegas gig and the tour will serve as something of a victory lap for the Doobie Brothers two years after they were inducted into the Rock & Roll Hall of Fame. The band, which Simmons and Johnston formed in San Jose in 1970 — and which went on to score era-defining hits such as "Listen to the Music," "China Grove," "Black Water," "Takin' It to the Streets" and "What a Fool Believes" — had been eligible for induction for decades to no avail.

But if the Doobies were once viewed as lightweights by rock critics, their perception has warmed more recently thanks to the embrace of admirers as varied as Luke Bryan, who toasted the band during the Rock Hall ceremony, and Solange, who's covered "What a Fool Believes" in concert. The Gen X and millennial fascination with so-called yacht rock — the genre coinage used to describe the cohort of acts spinning out mellow yet sophisticated soft-rock vibes in the late '70s and early '80s — helped the band's chances, as did the fact that another of the hall's 2020 inductees was veteran music manager Irving Azoff, whose powerful Full Stop firm took over the Doobies' affairs in 2015. Said Karim Karmi, who manages the group with Azoff: "You have to have champions on the committee [that handles nominations], and you have to tell a story besides 'They have hit songs and they tour a lot.'"

"We used to think the whole thing was bulls—," Simmons said of the organization's notoriously political selection process. "Until we got in."

LOS ANGELES — Olivia Rodrigo took a moment Tuesday during her concert in Los Angeles to address the elementary school shooting in Uvalde, Texas, that killed two teachers and 19 children.

"I'm so devastated about the ...Read More

Selena Gomez called for U.S. politicians to “actually change the laws” after at least 21 people were killed in a school shooting in her home state of Texas.

The shooting at Robb Elementary School in Uvalde on ...Read More