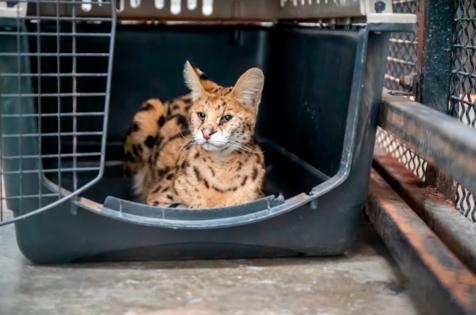 (UPI) A wildlife refuge in Arkansas said an African serval cat on the loose in Missouri for at least six months has been safely captured on a farm and will have a new home at the refuge.

Turpentine Creek Wildlife Refuge said it was contacted by Missouri Game and Fish about an African serval cat that had been spotted on multiple occasions over a six-month period in the Ozarks.

The refuge set up a trap on the property of a farmer who had repeatedly sighted the cat in the area, and the serval was ensnared within 12 hours.

Officials said the serval was likely an exotic pet that escaped or was abandoned by its owner. The cats are common as exotic pets and are used to breed Savannah cats, a hybrid of a serval and a domestic feline.

"It was amazing that this young serval could survive six months like she has, but she obviously was successful by the amount of bird feathers we found onsite. The skilled huntress had obviously been bringing her kills back to her adopted 'den' to consume them in safety," refuge president Tanya Smith said in the announcement.

The cat will have a new permanent home at the refuge. Officials said they may offer naming rights for the animal to a donor who gives a "substantial donation" to the facility.

(UPI) An animal control officer in San Francisco came to the rescue of a dog found trapped under a large pile of rocks near a beach shoreline.

(UPI) An animal shelter in New York is seeking a home for a dog described as "a terror," a fire-breathing demon and a whole jerk.

The Niagara SPCA said 26-pound Ralphie has been adopted twice, but was ...Read More

One important aspect of responsible dog ownership is ensuring your dog is comfortable and well-behaved around others. Socializing your puppy is crucial and should begin early on, as it sets your dog up to feel confident ...Read More

LOS ANGELES — Kilo, a muscular gray pit bull, stood staunchly by his homeless owner in the middle of 6th Street on L.A.'s skid row. His tongue lolled out, and his wide, square jaw was open as if he was grinning ear to ...Read More