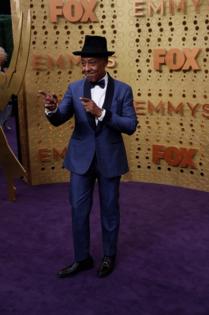 Gus Fring (Giancarlo Esposito), the bone-chilling drug kingpin who first appeared in “Breaking Bad,” did not appear in a single frame of Monday night’s episode of the AMC series’ prequel, “Better Call Saul.” But the Emmy-nominated actor’s presence is still very much felt.

That’s because Esposito shelved his character’s piercing stare and deadpan facial expressions and instead put his behind-the-camera skills on display: “Axe and Grind,” the sixth episode of the show’s final season, marks his TV directorial debut. (Esposito isn’t a newcomer to directing, though. He’s also helmed two feature films, “Gospel Hill” in 2008 and “The Show” in 2017.)

It’s only the second time in 56 episodes that a member of its cast has sat in the director’s chair — earlier this season Rhea Seehorn became the first with “Hit and Run.”

The L.A. Times spoke to Esposito about what went into his return to directing, how he shot that intense Lalo Salamanca scene, and what his experience as a first-time TV director was like. The following interview has been condensed and edited for clarity.

Q: What made you want to get back into the director’s chair, and why now?

To direct well is to direct in a way that allows the audience to see themselves within the story, create tension, create distance and create closeness — all of that in a visual way, not just speaking. As an actor, you speak a lot. Yeah, for Gus, he says less, and his physicality and motions demonstrate what’s really going on for him: i.e., the elevator scene back in “Breaking Bad” [Season 4, Episode 8] where he’s come back from an interview with the FBI and you see his fingers tapping together. Johan [Renck], who shot that episode, was like, “You’re doing something very incredible. What are you thinking? You’re doing this thing with your fingers. I love this, I’m going to get this.”

That’s when creativity and direction meet, and I wanted to be cognizant that that could happen in my episode with an actor if I observed them properly. Rhea [Seehorn] and Bob [Odenkirk] are certainly pretty incredible. I saw both of them do things that I wanted to capture with the camera because they were indicative of what the character was doing. I had a couple of moments like that with both of those actors where I shot it a certain way because of what they were doing physically to enhance the story in a different way.

Q: How and when did the idea of you directing an episode come about?

Esposito: The idea came up for me when I was doing “Breaking Bad.” But it never happened. It took 10 years. I asked once and never asked again.