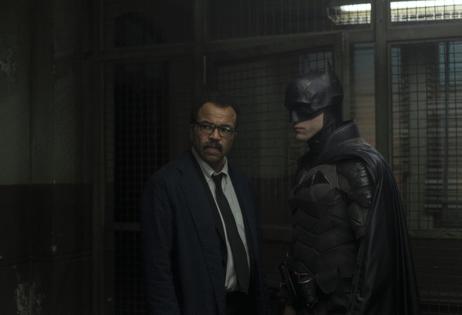 The newest iteration of DC'S Caped Crusader tops the DVD releases for the week of May 24.

"While chasing the Riddler, a Jigsaw-like serial murderer leaving the bodies of Gotham’s leaders in his wake, Batman stumbles into the deep-rooted corruption of the city, and organized crime’s grip on local politics and law enforcement, touching even his own storied family history, hitting uncomfortably close to home," writes Tribune News Service critic Katie Walsh in her review. "In its uncompromising vision, it may not be for everyone, but it’s definitely the movie that Batman needed."

"Studio 666": Dave Grohl and the rest of the Foo Fighters hole up in a haunted Encino mansion to record a new album, not realizing the home is filled with the murderous spirit of a '90s rock band that perished there.

"Umma": Supernatural thriller featuring Sandra Oh as a mother living on a remote farm with her daughter who becomes haunted after her uncle arrives unexpectedly to deliver the remains of her estranged mother.

"Ray Donovan: The Movie": The Showtime crime drama starring Liev Schreiber, which ended in 2020 after seven seasons, gets a movie sendoff that follows the Donovan family back to Boston for a final showdown.

"Supercool": A high school boy's wish to be cool magically comes true in this comedy, giving him the chance to experience a night for the ages.

"Ted K": Sharlto Copley stars as Ted Kaczynski in this biopic focused on the Unabomber's time living in a cabin in the small town of Lincoln, Montana, where he was arrested in 1996.

"The Burning Sea": When an offshore oil rig collapses in the North Sea, the team sent in to investigate realizes its just the beginning of a far worse catastrophe in this Norwegian disaster film.

"The Sinner: Season Four": USA crime drama returns featuring Bill Pullman as detective Harry Ambrose, who gets involved with another mysterious death while on vacation in Maine recovering from the events of the prior season.

"The Eden Theory": A small town is rocked by a mysterious disappearance in the sci-fi thriller, with the missing person's best friend the main suspect, except for the strange and unexplainable events that seem to be taking place.