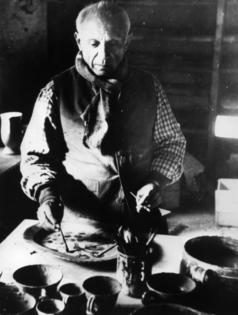 NEW YORK — Imagine this: A priceless Picasso work, its existence a secret shared by few, resurfaces a half-century later. At an estate sale in suburban New Jersey. Tucked inside a frame, and hidden behind another work of art.

Art collector Keith Coppola says the truth is beyond anyone’s imagination — and insists he’s not tilting at windmills with his tale of discovering the long-unseen Picasso depicting Don Quixote and sidekick Sancho Panza while buying $75 worth of art in the Garden State.

The work, dated Feb. 11, 1955, and delivered to the land of Springsteen only months later, is the real deal, confirmed by years of digging and authenticated by a cadre of world-renowned experts, according to Coppola.

He’s invested more than a dozen years trying to convince the Picasso estate of the masterpiece’s existence, a quest that brings to mind a familiar character of fiction.

“The whole thing is like everybody has said to me, ‘You’re Don Quixote! You’ve become him,’” acknowledges Coppola. “Nobody believes you, it’s so far fetched that you almost don’t want to believe me. But then again, I’ve got so much evidence that you’ve got to believe me if you really look at it.”

The ink brush work of the two characters conjured by author Miguel de Cervantes in the early 17th century was created well before Picasso’s academically accepted second incarnation, he said. That version, signed by the artist on Aug. 10, 1955, remains stored inside a basement vault at France’s St. Denis Church.

The work was featured in the French weekly journal Les Lettres Francaises to celebrate the 350th anniversary of part one of of Cervantes’ epic novel “Don Quixote,” released in 1605.

But Coppola can spend hours recounting the minutia of his February artwork and its multiple contrasts with the later piece: Its subtle incorporation of the constellations in homage to Picasso’s late wife, a hidden phallic symbol, the open mouth of the ass belonging to Sancho — and even its size: 62 inches by 48 inches, compared to 65 by 50 in the version known to the world.

Coppola, 55, a former Jersey guy now in South Carolina, notes the February date on his work coincides with the death of Picasso’s wife of 37 years and longtime muse, ballerina Olga Khokhlova — a pivotal link to the truth.

“She was Picasso’s goddess, a spiritual inspiration,” he said, ”and now she is denied her existence in the capacity that he memorialized her. Without Olga, there would be no Don Quixote.”