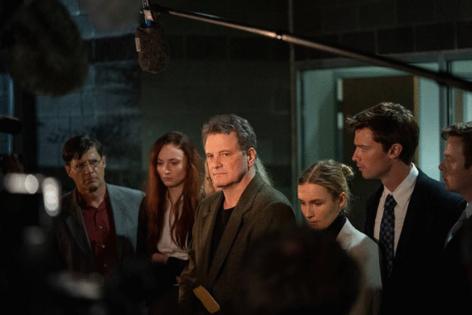 After viewing the first episode of HBO Max’s “The Staircase,” Charlotte attorney David Rudolf — who defended Michael Peterson in the real-life murder case depicted in the dramatized limited series — was interested to watch the inspired-by-true-events show unfold.

By the end of the fourth episode, however, he was just annoyed.

“A lot of that’s just hard for me to even comment on,” Rudolf said.

Before we get to what happened in Episode 4 (and you are forewarned: SPOILERS ahead), if you’ve seen Episode 1 you’ll remember that the hour is bookended by scenes showing Michael (Colin Firth) with a woman played by the French actress Juliette Binoche.

It’s not clear who Binoche’s character is supposed to be; although right before the credits roll, it seems clear that in these scenes — set in 2017, more than 15 years after Kathleen’s death — Sophie and Michael are romantically involved. She shows up again in Episodes 2 and 3 in 2017-set scenes with Michael.

But the dramatized HBO series drops a bombshell at the end of Episode 4:

Binoche’s Brunet is heard reading a letter as Firth’s Michael is shown in a prison cell looking at it. In the letter, the character asserts her belief that Michael is innocent, and says that “while you wait for your freedom, your story will be told. I will tell it for you.” Binoche’s Brunet is then shown on-screen sitting down with the two characters who have been established in previous episodes as making a documentary about the case: Jean-Xavier de Lestrade (Vincent Vermignon) and Denis Poncet (Frank Feys).

“Let me show you what I’ve cut together,” she tells them, with a smile, right before the credits roll.

All of this amounts to a strong insinuation by the HBO series’ creator, Antonio Campos, that this woman is about to orchestrate the creation of a biased documentary.

If you don’t know the true story well, you might think that there’s some truth to all of this.