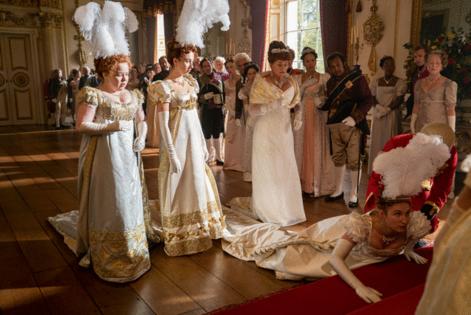 Gentle readers of the Ton, Season 3 of “Bridgerton” will stray from its source material and focus on the romance of Colin Bridgerton and Penelope Featherington.

According to Lady Whistledown herself, the forthcoming season of Netflix’s hit period drama will sideline Colin’s elder brother, Benedict (Luke Thompson), and will instead dive into the relationship of the characters played by Luke Newton and Nicola Coughlan.

At Netflix’s FYSEE Space’s opening night ATAS panel on Sunday, Coughlan was asked what she can reveal about Season 3.

“Like Lady Whistledown, I have been keeping a secret for quite some time, and I can confirm to you all that Season 3 is Colin and Penelope’s love story,” Coughlan said, according to Deadline. “I have kept that secret since two weeks into Season 2. This is the first time I am saying it here.”

Colin and Penelope’s relationship has been teased and used as a subplot since the debut season of Netflix’s Regency London-set series. But their budding romance was further complicated in the Season 2 finale when Pen overheard Colin telling his friends that he would never court her.

The diss came immediately after Penelope fell out with her best friend, Eloise — Colin’s younger sister — when Eloise confronted her about her literary side gig and using the Bridgerton family matters to fill the pages of Lady Whistledown’s scandal sheet.

(Though Penelope writes Whistledown, the literary alter ego who narrates the series is actually voiced by legendary actor Julie Andrews.)

Each of Julia Quinn’s romance novels in the “Bridgerton” series focuses on a Bridgerton sibling in the eight-child, aristocratic family. A ninth book, “The Bridgertons: Happily Ever After,” included the love story of matriarch Violet Bridgerton.

The steamy first season of the drama showcased Phoebe Dynevor and breakout star Regé-Jean Page as Daphne Bridgerton and the Duke of Hastings, respectively, and was primarily pulled from the first book, “The Duke and I.” Page did not return for Season 2, which was based on Quinn’s second novel, “The Viscount Who Loved Me.”

Colin’s book, “Romancing Mister Bridgerton,” is the fourth in the series and is preceded by Benedict’s “An Offer From a Gentleman.” But producer Shondaland has taken liberties with the source material for the streaming series, notably assembling a diverse cast to play the well-heeled characters and revealing Lady Whistledown’s identity much earlier than the books did.

Season 3 has already seen a number of creative changes. Series creator Chris Van Dusen stepped down as showrunner and is being replaced by “Bridgerton” writer Jess Brownell. And the role of young Francesca Bridgerton has been recast after actor Ruby Stokes landed a lead role in Netflix’s “Lockwood & Co.” Hannah Dodd will replace her.

The franchise is also getting a spinoff prequel that revolves around the enigmatic Queen Charlotte, her marriage to King George and the societal shift that followed their 1800s union — during which the original “Bridgerton” series is set.

We've invested over​ $50 billion to develop medicines of the future. ​

The limited-prequel series was announced in late March and is being written by Shonda Rhimes, who has thus far executive produced the original series. The still-untitled show will tell the queen’s origin story and will also include a young Violet Bridgerton and Lady Danbury.