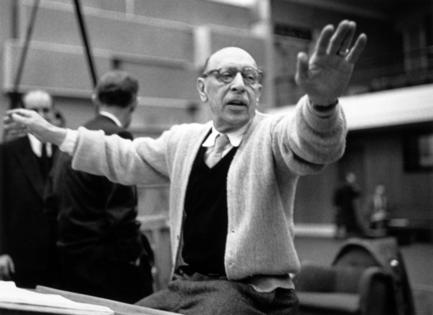 LOS ANGELES — The first week of May, I attended four concerts. All four, whether by chance or intent, had a connection with Ukraine. That was obvious the first day of May at a benefit concert for Ukraine put on by the Wende Museum and Jacaranda Music at the Robert Frost Auditorium in Culver City. And while Ukrainian-American pianist Inna Faliks’ Ukraine-centric recital several days later at the Wende contained no Ukrainian music, its programmatic theme was the novel “Master and Margarita” by the Ukrainian-born author Mikhail Bulgakov.

In between those two concerts, a pair of concerts at Walt Disney Concert Hall were seemingly unrelated to Ukraine. No mention was made of Ukraine or Russia’s invasion at a piano recital by Daniil Trifonov or at the first of Gustavo Dudamel’s two-week Los Angeles Philharmonic series combining Stravinsky’s early ballets with Latin American music. But the performances were, indeed, indebted to the besieged country so much on our minds.

Trifonov, the 31-year-old Russian star pianist who lives in New York, had planned his program well before Russia lined up its tanks on the Ukrainian border last winter. He began with the Third Piano Sonata by Karol Szymanowski, the great Polish composer of the first half of the 20th century who inspired a modern nationalist Polish musical style. It turns out Szymanowski was born in Ukraine.

Prokofiev’s quirky, nasty, seldom-heard piano miniatures, “Sarcasms,” followed. It turns out that one of Russia’s best-known 20th century composers was from a village outside Donetsk, the main city of Ukraine’s disputed Donbas region, which so obsesses Russian president Vladimir Putin. Trifonov did add an unannounced Russian-sounding Ukrainian encore by Mykola Lysenko.

What’s Stravinsky’s “The Rite of Spring,” maybe the most celebrated and influential work of the 20th century and which Dudamel stunningly performed two days later, got to do with Ukraine? More than is normally acknowledged. Stravinsky’s mother was Ukrainian. His family had an estate in Ukraine, where the young composer spent idyllic summers. Although Stravinsky did his best to disguise it, “The Rite” includes elements of Ukrainian folk music, as do other early Stravinsky ballets. The gorgeous lullaby from “The Firebird” is said to also have had Ukrainian folk origins.

Given the changeability of borders in that part of the world, and the political and artistic dominance of the Russian empire and Soviet Union, it is not altogether surprising that Polish music might have Ukrainian roots or that Russian and Ukrainian music would be closely intertwined. Before Ukraine gained independence from Russia in 1991, it would have been as natural for a young Prokofiev to head off to Moscow as it might be for a young Angeleno composer to go to New York (a trip that happens to be five times larger than the distance between Kyiv and Moscow).

So, let’s look at the United States. George Gershwin, Leonard Bernstein, Michael Tilson Thomas and Morton Feldman all have Ukrainian roots. Factor in Belarus and Lithuania — namely the Pale of Settlement, with its Jewish shtetls, or villages, that extended across varying borders and where ethnic identity in the region was often stronger than national — and we can include Irving Berlin, Aaron Copland and Vernon Duke, among others, as creators of what we like to consider quintessential American music.

Now add violinists Isaac Stern and Jascha Heifetz and cellist Gregor Piatigorsky. All were born or rooted in Ukraine and all fundamentally contributed to how Americans came to make and listen to music.

Nationalism and music is, of course, always complicated. No one in the West, for instance, wants to hear Tchaikovsky’s militaristic “1812 Overture” right now. We cancel Tchaikovsky’s “Little Russian” Symphony because of its title. (“Little Russia” was once Russia’s fond, albeit condescending, nickname for what it considered to be favored region in its empire, rather than a nation in its own right.)

The context of both of these works should be examined more closely, though. The “1812" brass-band bellicosity and canon shots can be hard to take even in peacetime. But it was, in fact, written in 1880 to commemorate the Russian victory over Napoleon’s invading army.

Kate Moss is the latest celebrity to be drawn into the protracted defamation trial between actor Johnny Depp and his ex-wife Amber Heard. The former supermodel appeared in a Virginia courtroom on Wednesday to testify via ...Read More

Rated PG-13 for sequences of intense action, and some strong language.

What it’s about: The long-awaited sequel to "Top Gun" finds Maverick returning to flight school to teach the new naval aviators...Read More

Q. You recently recommended a machine for promoting collagen growth under the skin. I forgot the name and I'd like to buy one. Would you please provide the name and how much is it?

The “FBI” season finale, about a student with a stock of weapons, was yanked from the schedule Tuesday, hours after a teenage gunman killed 19 students and two teachers at a Texas elementary school.

Matthew McConaughey urged Americans to “find a common ground” after at least 21 people, including 19 children, were killed in an elementary school shooting in his hometown of Uvalde, Texas, on Tuesday.