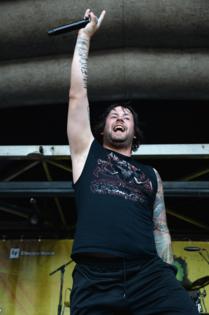 Trevor Strnad, the longtime vocalist of the popular death metal group The Black Dahlia Murder, has died at age 41, his bandmates announced “with deep sadness” on Wednesday.

“Beloved son, brother, and Shepard of good times, he was loved by all that met him,” the band wrote in an Instagram post.

“A walking encyclopedia of all things music. He was a hugger, a writer, and truly one of the world’s greatest entertainers. His lyrics provided the world with stories and spells and horror and whimsy. It was his life to be your show.”

A cause of death for Strnad has not been released, but the band included the phone number of the National Suicide Prevention Lifeline — 800-273-8255 — in its post.

Strnad was a co-founder of The Black Dahlia Murder, which debuted in 2001 out of Michigan and has released nine albums, including seven that reached Billboard’s Hot 200 album chart.

The band is named after the mysterious and much-discussed death of Elizabeth Short in Los Angeles in 1947. Short was referred to colloquially as the Black Dahlia as public interest in her case mounted.

Strnad’s death was mourned in a separate post by The Black Dahlia Murder guitarist Brandon Ellis, who wrote he “can not even begin to process this.”

“A best friend. One of the funniest and most entertaining people to walk the earth,” Ellis wrote on Instagram. “The life of the party that is The Black Dahlia Murder, as well as any given room he happens to occupy. A lyrical mastermind. A champion of the entire culture of heavy music. Also my biggest supporter. This man changed my life and believed in me more than I do myself.

“I can not believe there will be no more laughs had, songs written together, or stages decimated with Trevor at the helm. I hope he knew how much he was loved the world over.”

If you own a Tesla, or a loved one does, or you're thinking about buying one, or you share public roads with Tesla cars, you might want to watch the new documentary "Elon Musk's Crash Course."