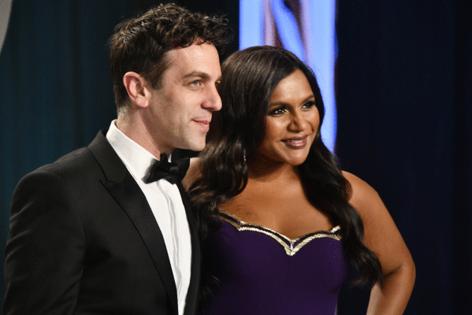 NEW YORK — B.J. Novak’s directorial debut is coming to the Tribeca Festival with a vengeance.

The dark comedy-thriller “Vengeance” will be the New York City festival’s centerpiece film and is set to make its world premiere at the BMCC Tribeca Performing Arts Center on June 12, organizers announced Thursday.

The movie, which “The Office” alum Novak also stars in, centers on “a journalist who travels from New York City to West Texas to investigate the mysterious death of a young woman,” according to its summary.

“I am overwhelmed with happiness that ‘Vengeance’ will premiere as the centerpiece film of the Tribeca Festival, which has supported so many of my favorite artists over the years,” Novak said in a statement.

“Vengeance” is the latest headliner to be announced for next month’s Tribeca Festival. Organizers previously revealed “Halftime,” a documentary about Jennifer Lopez, will make its world premiere as the event’s opening night selection on June 8. The world premiere of the documentary “Loudmouth” about the Rev. Al Sharpton, meanwhile, will close out the festival on June 19.

The 2022 edition of Tribeca will also feature the premiere of Ray Romano’s directorial debut, “Somewhere in Queens,” on June 10; a storytellers conversation with Taylor Swift on June 11; and the premiere of the ESPN docuseries “The Captain” about Derek Jeter on June 12, with a talk featuring the former New York Yankee to follow.

Novak, 42, is best known for his work on the NBC sitcom “The Office,” which he wrote for and starred on as Ryan Howard.

When it came time to shoot the film “Aquaman,” Amber Heard almost lost her gig as Aquaman’s love interest, Mera. But according to a studio executive, it had nothing to do with any drama between her and ex-husband ...Read More

In a TV special filmed before the 94th Academy Awards took place, Will Smith recounted a prescient and frightening vision he had of his "whole life ... getting destroyed."

While speaking with David Letterman for his ...Read More

"The Devil You Know": Omar Epps plays an ex-con and recovered addict enjoying a new lease on life who finds himself drawn back into ...Read More

It was the day before ...Read More

Early on in David Cronenberg’s “Crimes of the Future,” a speculative horror-comedy as wildly deranged as it is beautifully controlled, we witness a live demonstration that functions as an art show, a medical ...Read More