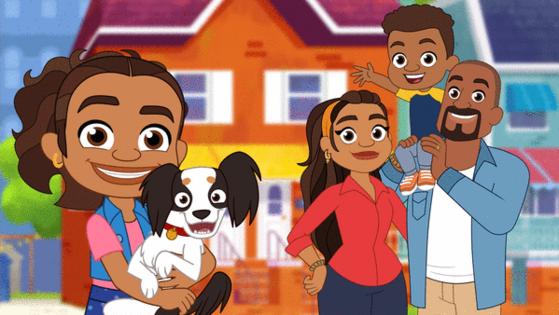 PITTSBURGH — Anyone who has enjoyed the character of Maria on "Sesame Street" any time since her 1971 debut has Pittsburgh to thank for leading the actor that played her to that show.

Sonia Manzano arrived at Carnegie Mellon University from New York City's South Bronx neighborhood in 1968. She was only a Tartan for three years, but CMU provided her with two career-defining moments: getting into the original cast of "Godspell," which was developed at CMU, and, most critically, that fateful day in the university's student union when she caught an episode of "Sesame Street" on television for the first time.

Her immediate love of "Sesame Street" led her to pursue a role on the show, where she portrayed Maria for 44 years. Manzano will be returning to PBS Kids on Monday as the creator of "Alma's Way," the newest show from Pittsburgh-based Fred Rogers Productions about a 6-year-old Puerto Rican girl enjoying her life in the Bronx while learning something new everyday.

"Pittsburgh was the first place I saw 'Sesame Street,'" Manzano told the Post-Gazette. "There are so many connections with Pittsburgh. It's kind of funny that I'm a little bit back there."

The show follows Alma as she explores her neighborhood, interacts with various aspects of multiple Latin cultures and hangs out with her family that includes her parents, grandfather, little brother, Junior, and dog, Chacho. It will feature plenty of music, challenges to help children at home sharpen their problem-solving skills, and a theme song written and produced by Bill Sherman and Lin-Manuel Miranda.

"Alma's Way" will consist of 40 episodes containing two 11-minute stories each in its inaugural season. Manzano was brought onto the project by Linda Simensky, PBS Kids' head of content, who also connected her with Fred Rogers Productions when Manzano was looking for a collaborator with more experience in the animation space.

"In talking with [Sonia], she had a really clear vision for the story she wanted to tell and the characters she wanted to create," said Ellen Doherty, Fred Rogers Productions' chief creative officer. "It's easy to have an idea that's one-note on the surface. But to create a television series, you have to have a real clear version that could sustain 80 stories. And Sonia had that."

Pittsburgh references were inevitably going to abound in a Fred Rogers Productions show. Doherty said that Alma's house number is 143, Fred Rogers' code for "I love you," and that eagle-eyed viewers might catch the resemblance between Junior's toy diplodocus and the Carnegie Museum of Natural History's famous Dippy the Dinosaur statue. The New York City subway's 6 train also plays a similar role in the lives of Bronx residents to the trolley on "Daniel Tiger's Neighborhood."

Manzano said that part of what she wants to get across with "Alma's Way" is the idea that "memorization isn't thinking." That concept gets illustrated during "Alma's think-throughs" that require her to step back and come up with solutions to a problem before declaring, "I know what to do!"

"I wanted it to be a show about thinking," Manzano said, adding: "I wanted them to know they have a brain and should use it."