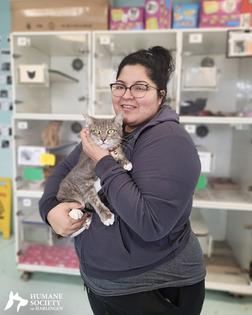 The Humane Society of Harlingen said the 6-year-old cat, named Ollie, was adopted as a kitten in 2016 and went missing the following year.

"His family looked far and wide hoping to see him soon. As years passed, the family moved and faced the hard reality that they may never see Ollie again," HSH said in a Facebook post.

The shelter said Animal Control brought a stray cat to the shelter on Nov. 30 and they scanned him for a microchip.

"His microchip was quickly looked up and we discovered he had an owner," the shelter said. Our staff scrolled through our records and found that Ollie's last visit to our shelter was in 2016!

Ollie's owner, Stephanie Garza, was contacted and she rushed to the shelter for a long-awaited reunion.

The shelter said the story should serve as a reminder of the importance of microchipping pets.

Recent surveys show that the No. 1 preventative health issue in American dogs today is obesity. Managing the weight of our dogs can be just as difficult as managing our own, often because owners don’t recognize or are ...Read More