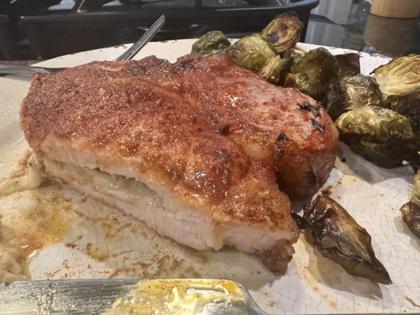 Sometimes a recipe is so darn easy it’s almost embarrassing to write about it. You could say this recipe qualifies. But I will do my best to make this an interesting column with delicious food awaiting you at the end of the culinary rainbow.

One of the things I like about pork chops is the ability to get them cut to order at most grocery stores. I always go 1 1/4 to 1 1/2 inches thick with the bone in. It has always been my contention, imagined or not, that the bone adds flavor and helps retain moisture. I believe that to be the case with chicken and beef as well. Unfortunately, in today’s world of supply line stress and staffing challenges, my local grocer no longer offers cut-to-order chops. Heck, they don’t even get pork chops with bones in them. So naturally I had to look elsewhere, which in hindsight was a blessing.

In my neck of the woods (southern Indiana just outside of Louisville) we have a locally owned butcher/small grocer called Preferred Meats. They offer high quality hand-cut beef, poultry and pork. They even carry elk, venison and ostrich. I was excited to learn they had some hand-cut bone-in chops (locally sourced) cut to 1 1/4 inch thick. I swung by and picked up two. They were a little more expensive, but not by much. They were beautifully marbled and delicious. For a little more money they sell prime pork chops, which are even more beautifully marbled. I’ll be giving those a try next time, though it’s hard to fathom them being much better than these.

First, I fired up the pellet smoker to its lowest setting (150 degrees Fahrenheit) and allowed the chops to smoke for roughly one hour. I then brought the chops in and carved a pocket into each chop. I did this by placing the chop on it’s side, bone side down, and using a small knife, piercing inward toward the bone. I then angled the blade to the left, slicing upward while not increasing the size of the entry incision by much at all. I then flipped the sharp end of the bald to the right and did the same thing. You end up with a fairly small entry incision and a fairly large pocket for stuffing.

For the stuffing, I mixed 1/2 cup shredded Gruyere cheese with 1/4 cup Dijon mustard and 1 tablespoon of whole mustard seeds. Gruyere is perfect because it melts so easily. I stuffed the pockets of both chops full and secured with a sturdy toothpick. I then coated the chops with olive oil and moderately applied my favorite pork rub to both sides of the chops. The temperature was turned up to 300 degrees and the chops were smoked for another 45 minutes or so, until the internal temperature of the meat hit 140 degrees. We let them rest for five minutes and then served. Wow. Delicious. Liz said they were better than any steak I have fixed of late, and that’s saying something because she doesn’t normally get too excited when we fix pork chops.

I’ve learned my lesson. It’s definitely worth finding your locally owned butcher shop and buying locally sourced products. Give these a try!

When Passover begins at sundown on Friday, April 15, it is tradition for Jews near and far to celebrate the commemorative Seder dinner much the original way.

They will light candles, read from the Haggadah, retelling the ...Read More

MINNEAPOLIS — It sounds heretical, particularly since the outdoor cooking season is getting started, but here goes: For a truly ...Read More