The Kitchn: Bucatini all'Amatriciana is destined to be your new favorite weeknight pasta 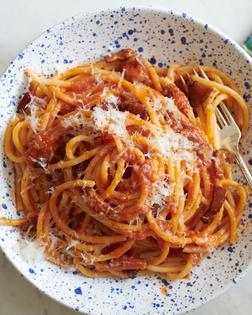 Sugo all’Amatriciana (sauce Amatriciana) is a classic Roman tomato-based sauce that includes guanciale (cured pork jowl) and Pecorino Romano cheese. The guanciale is cooked until crisp and the rendered fat helps create the delicious porky flavor base of the sauce. The salty Pecorino Romano cheese adds flavor and creaminess. What sets this sauce apart from some other traditional red sauces is that the tomatoes are very lightly cooked, which makes the tomato flavor lighter and fresher than a long-stewed tomato sauce.

In this recipe I stay (mostly) true to the original by keeping both ingredients and cook time minimal. I also reached out to Senior Contributing Food Editor Sheela Prakash, our resident Mediterranean expert, for advice. She told me that she had a “killer Amatriciana” at Evan Funke’s Felix Trattoria in Los Angeles. She said his version was very pork-forward and served with rigatoni. I kept that in mind when developing this recipe.

I made the recipe a few times, each time with varying amounts of guanciale. For my taste buds, the version that reigned supreme was the one with the most guanciale. Not only was the sauce delicious, but it also had the exact right amount of guanciale pieces to chew on. The best part about this sauce — besides the way it tastes — is how quickly the whole meal comes together. Big flavor in under 30 minutes? Count me in!

What does “Amatriciana” mean in Italian?

Amatriciana gets its name from Amatrice, the town about a two-hour drive east of Rome where this sauce originated. Original iterations of the sauce, known as pasta alla gricia, didn’t include tomato. This “white” version of Amatriciana is said to get its name from the Italian word gricio, an early Roman word for bread-makers and sellers of other basic food staples. Pasta alla gricia is also considered to be the predecessor to what we know today as carbonara. The Amatrice version of Amatriciana is served with spaghetti. When the sauce made its way to Roma, bucatini was swapped in.

What’s the difference between Arrabiata and Amatriciana?

Arrabiata sauce and Amatriciana are both tomato-based, but otherwise they are distinct. Arrabiata doesn’t have guanciale or Pecorino Romano in it. Arrabiata is known for its signature heat, which comes from plenty of red pepper flakes.

The guanciale: You can’t have Amatriciana without guanciale. The fat of the guanciale is the base of the sauce. Guanicale is cured with salt and spices and some have more spices rubbed on the exterior than others. If possible, choose a guanciale that has a lesser amount of spices. Any guanciale will do — just know that if you have a guanciale with more spices on the exterior, those spices will season the sauce. If you can’t find guanciale, some recipes recommend swapping in pancetta. The dish will still be delicious, but know you won’t be making true Amatriciana.

Trim the guanciale into lardons, and cook until the meat is crisp and the fat has rendered. The fat is whisked into the tomato sauce, which gives the sauce its signature porky flavor.

This vibrant salad is perfect for barbecues and backyard parties. The dressing is whisked together right in the salad bowl before you add the vegetables, so it’s also incredibly easy to make. Choose a fairly firm avocado...Read More

Q: What are truffles?

A: Misshapen and lumpy, these earthy orbs may not be much to look at, but they’re among the most prized delicacies in the culinary world. Intensely flavored and aromatic — a musky, nutty fusion �...Read More

Peach season is in full swing now. I have been delighting in all the ways to develop cooked and no-cook peach dishes. Chilled peach soup, peach salads with arugula and burrata, and roast chicken with peach sauce are just a...Read More

Fresh herbs overflow in the garden and at farmers markets in most of the country at this time of year. My 3-year-old granddaughter eats them by the handful straight from her garden. I prefer to scatter them with abandon ...Read More

Popcorn salad is a star at picnics and barbecues all across the Midwest. Undeniably curious in both title and texture, popcorn salad is a surprisingly delicious retro side dish whose satisfying crunch will keep you going ...Read More

Seared tuna is one of those throwback ’90s dishes that never really disappeared from menus because it’s just plain tasty. While it may seem like a complicated restaurant dish, it’s quite simple to tackle at home. A ...Read More