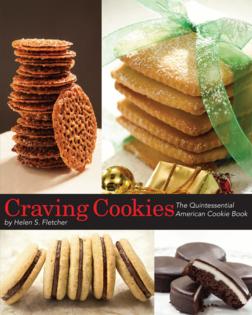 To the baking world, it’s an unthinkable suggestion bordering on blasphemy: When making certain desserts, it’s just fine to use imitation vanilla extract.

So says Helen S. Fletcher, the author of “Craving Cookies: The Quintessential American Cookie Book.” It may be the best cookie cookbook you will ever see.

Fletcher is the pastry chef at Tony’s, one of the highest-rated fine-dining establishments in St. Louis. For more than 20 years, she owned Truffes in University City, a bakery that catered to restaurants, hotels and caterers, and also did a lot of work with weddings. So she knows about baking, even when it comes to imitation vanilla.

“At work, at Tony’s… I use vanilla that costs $400 a gallon,” she said, demonstrating in one short sentence the difference between professional bakers and hobbyists.

Even small bottles of what she considers the best tasting, most aromatic vanilla, Tahitian vanilla, can cost $35. And she doesn’t want to price anyone out of the joy of baking.

And that means using imitation vanilla when the vanilla flavor doesn’t stand on its own, such as in recipes that also use a lot of spice or chocolate. She usually uses professional imitation vanilla herself, but she also recommends McCormick’s.

Fletcher, 81, has had no formal training as a baker. So she has developed her own way of doing things, tips and tricks and hacks that work wonders but that other bakers don’t use.

“Sometimes, when you are trained, you get stuck on the way you are taught or the way the book taught you. Well, I wasn’t trained and I didn’t have the book,” she said.

Her new cookbook, which is self-published, has tricks for baking the way she bakes.

For instance, she recommends something she calls the double-pan method. When she was baking croissants, she noticed that when the outsides were golden brown and perfect, the insides were still undercooked. If she lengthened the cooking time, the interiors would be cooked but the bottoms would be burned.

So she put one baking sheet on top of another, and baked on that. The result was perfect croissants every time — and not just croissants but cookies and other pastries that are made with brown sugar, honey, molasses or chocolate, or that have a lot of butter or spice in them.

Cookies and pastries cooked on a double pan will take a little longer to bake; probably about 10% to 15% beyond the original time.

If you bake something that sticks to the sides of the pan and is hard to remove, she recommends a very simple solution: Turn the pan upside down over a board or platter and heat the side of the pan with a blow dryer. The brownies or caramels or lemon bars will drop out easily.

“At work, I use a propane (blow torch). I modified it to a blow dryer on high. It just really works for a lot of things. I use it for cheesecakes, anything that needs to be released with heat,” she said.

Lemon bars, which she writes “are as American as chocolate chip cookies, and loved just as much,” are particularly prone to sticking. As the bars bake, they pull away from the sides of the pan, and when the lemon topping is added it fills the gap and sticks to the pan.

She developed another technique to keep this from happening. She calls it spooning the crust. As soon as the crust is taken out of the oven, while it is still soft, she goes around the edge with a soup spoon and gently presses it back up against the sides of the pan.

The idea of using bread flour to make chewy cookies chewier isn’t hers alone, but she embraces it fully — while suggesting it is also best when doing so to refrigerate the dough overnight, which allows the flour to fully hydrate.

Nor can she claim credit for the idea of adding corn syrup to make caramel to keep the sugar from granulating (though she did come up with the idea of heating the cream to keep the caramel from temporarily solidifying). And other bakers, too, use a food processor for making some doughs, though doing so seems counterintuitive.

Shortbread, for instance, is “the easiest thing to make in the food processor. You use cold butter and just cut it into the flour until it’s like sand. This way, it comes out of the food processor cold and ready to go,” she said.

“Craving Cookies” is Fletcher’s second cookbook. The first, “The New Pastry Cook,” came out in 1986. Someone has a copy on sale at Amazon for $253, she said.

“What moron would pay $253 for a pastry book?” said the writer of that pastry book. “Two hundred fifty-three dollars, and no sense.”

The new book, “Craving Cookies,” focuses only on American cookies. It was originally going to be twice as long as its 80 recipes, and would include European cookies as well, but she didn’t want to have to charge too much for it.

So a second book, as yet untitled, will come out next year. It will focus on European cookies.

“There’s so much to learn. I think that is what I like most about food. There is no end to it; there’s always more.”

Note: Sanding sugar is a coarse sugar that will not melt in the oven. It can be found at some grocery stores, big-box stores, kitchen supply stores and online.

2. Beat the butter and sugar together until very light. Add the egg yolk and beat until completely combined. Add almond and vanilla extracts, and beat well. Add the flour all at once and mix until the dough comes together in a ball.

3. If using cookie cutters, divide the dough in half (290 grams or 10 ounces each). If it is too soft to work with, refrigerate for about 30 minutes. Place between 2 sheets of waxed paper and roll with a rolling pin to about ¼-inch thickness, and cut out the cookies. Repeat with the second half of the dough. Gather the pieces that are left over and reroll as necessary.

4. If rolling and slicing, divide the dough in half as directed in step 3. Roll each half into a 10-inch log. Wrap in plastic wrap and refrigerate until firm. Slice about ¼-inch thick. (The logs may be frozen, thawed and sliced as needed. Bake as directed).

5. Place cookies about 1½ inch apart on the prepared baking sheets. Bake for 7 minutes, then rotate the pan and bake for 6 to 7 more minutes if very small or 10 to 12 minutes if larger, until lightly browned. Transfer to a wire rack to cool.

6. While cookies cool, prepare the quick-tempering chocolate. Mix chocolate and shortening together in a bowl. Melt by either placing the bowl over a pot of simmering water and stirring until combined or by placing bowl in microwave and heating in 10-second bursts, stirring between each one, until combined.

7. In a separate bowl, mix sanding sugar with salt to taste. You want to be able to taste the salt, but the sugar should be the predominant flavor.

8. Holding a cookie upside-down, dip the top half of the cookie into the chocolate. Sprinkle with the sugar/salt mixture. Allow the chocolate to set firmly at room temperature.

With everyone concentrating on the gifts they plan to give others at this time of the year, we often overlook the smallest of gifts that are always received warmly.

I’m talking about cookies. The holiday season is ...Read More

This crispy-on-the-bottom-and-chewy-on-the-inside gluten-free cookie recipe is a twist on a traditional Italian holiday treat, pignoli, or pine nut cookies. Look for almond paste — a mixture of ground almonds and sugar (...Read More

No matter what time of year it is, I am always up for a grilled steak. If it’s too cold outdoors, you can use a seasoned iron skillet on high heat for a successful result. For years, I used seasoned compound butters to ...Read More

Eating healthy has never been so easy — or so quick! A multi-cooker makes cooking a healthy meal accessible and approachable, and takes less time and energy than not-so-healthy fast-food runs or tossing a frozen pizza ...Read More

Kary Osmond will not file a recipe this week.

If you’re someone who loves all things cinnamon, these muffins were made for you. They bake up soft and fluffy, and pack in not one or two, but three doses of cinnamon. You’ll find it mixed into the batter, as a ...Read More