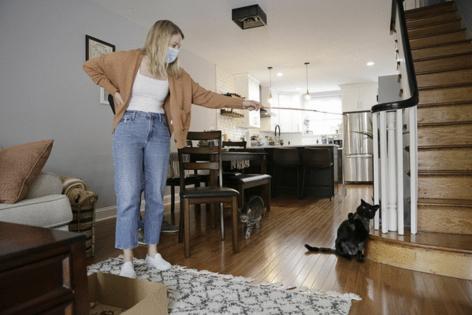 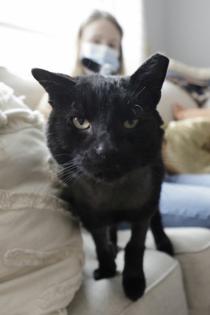 The Philly street cat was the victim of a brutal attack a month ago. Captured on video, it was shocking even by this tough town's standards. The odds of him making it weren't good.

Flash forward: Buddy was watching the 76ers trounce the Raptors in the NBA playoffs on a cozy couch with a new kitty friend and two human fosters who adore him. He had toys galore, all the catnip he wanted, and a social media following hanging on his every meow.

And thanks to this little black cat who almost lost his life, other injured animals will have a better chance to live theirs.

It started on a porch in East Frankford. Buddy was what animal welfare folk call a community cat. People would put out food and water for him, but he was a rambling man. He seemed to prefer the outdoor life.

But on that day, two boys with two dogs walked by. They can be seen on a home-security video returning shortly afterward and letting the dogs loose on Buddy, who was on the porch. A man eventually came out of the house and rescued the cat.

Two boys, age 12 and 17, were arrested a few days later as juveniles on animal cruelty charges, which are still pending. The dogs, which belong to a family member of one of the boys, remain in Pennsylvania SPCA (PSPCA) custody.

Badly mauled, Buddy was brought to the PSPCA for treatment but transferred to the Blue Pearl emergency veterinary facility for more intensive care. He was unresponsive, in shock, bleeding internally. His heart rate was almost twice what it should have been. His caretakers thought he might die.

But no one was giving up. That included Buddy.

(UPI) A Texas family's 2-year-old Great Dane was dubbed the tallest dog in the world by Guinness World Records after being officially measured at 3 feet, 5.18 inches tall.

(UPI) A black bear was in hot pursuit of Jason and Rachel Smith of Apopka, Fla., when they stepped outside their home with their small dog.

Located east of Kyiv, Borodianka has been devastated by intense ...Read More

With allergy season in full swing, many dog owners fail to realize that their pets can suffer from allergies just as easily as humans can. Common allergens that affect dogs are things that can be inhaled, such as mold, ...Read More