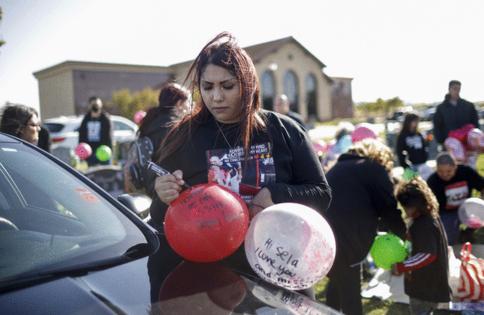 It joined dozens of other candy-colored balloons carrying poignant messages memorializing 7-year-old Sela Mataele and her closest father figure, Ramiro Castro, who were killed in a horrific accident one year ago on April 12, 2021, at the hands of a repeat drunken driver.

While friends and family who gathered for the occasion all looked up, Sela’s mother, Corrina Rosalez, turned away. She stared hard at the ground, wiping her eyes so her two boys – who along with her were badly injured in the same accident – wouldn’t notice the tears.

It’s been an agonizing year for Rosalez, who’s had to put aside her grief to pay off mounting medical bills from the accident, relive the trauma by attending the court appearances of the driver who crashed into her family’s Corolla, and help her two sons try to cope with the tragedy.

“People tell me I’m strong, but I don’t feel it,” she said at the memorial gathering, sitting on the grass in front of Sela and Castro’s burial plots.

“I’m just not ready to deal with it, with any of it,” she said. “I’m emotionally not there right now. I know I’m here physically, but I guess I’ve torn myself away from a lot of people. And I don’t like hearing that it’s going to be OK.”

Rosalez can’t control the occasional memory flashes of that fateful day. They might strike when she’s sitting alone in traffic, or when her phone sends a random photo memory of a grinning Sela to the lock screen. That’s when images of the accident come flooding back.

She was falling asleep in the passenger seat that evening last April while Castro, her boyfriend of five years, drove the family home from dinner at Golden Corral Buffet & Grill in Concord.

Sela, Nicholas and Julian (then 7, 5 and 2) were settling down from a sugar rush in the back seat as the family’s Corolla coasted down West Leland Street toward John Henry Johnson Park in Pittsburg.

Suddenly, a speeding Camaro smashed into the rear of the Corolla, killing Castro at the scene and severely injuring Sela, who was airlifted to UCSF Benioff Children’s Hospital in Oakland and pronounced dead there.

Rated PG-13 for some suggestive material and brief language.

What it’s about: An unauthorized biopic inspired by the life of singing superstar Celine Dion, fictionalized here as Aline Dieu.