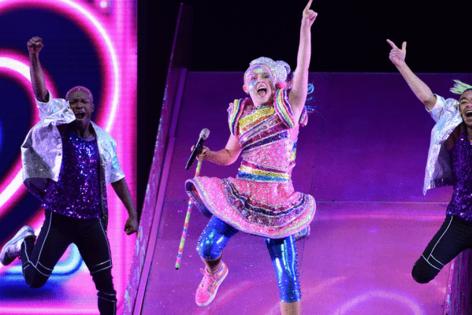 So why wasn’t she invited to the 2022 Kids’ Choice Awards?

On Saturday, Siwa revealed via TikTok that she did not receive a ticket to the Nickelodeon awards show after fans noticed her absence from Santa Monica’s Barker Hangar airport and event venue.

“A lot of you have been asking me why I’m not at the Nickelodeon Kids’ Choice Awards tonight, and the answer is very simple: I wasn’t invited,” Siwa explained in a short video.

Though the 18-year-old recording artist hasn’t personally speculated about why she was excluded from the ceremony, fans have posited some theories — which Siwa has retweeted. Siwa was nominated for favorite social music star at the 2022 Kids’ Choice Awards.

“The only year that @itsjojosiwa didn’t get invited to the kids choice awards is when she comes out and cuts her hair??????” one person wrote in a tweet reposted by Siwa. “Sus @nickelodeon.”

“Obsessed with the teenage girl celebrities who don’t take s— from their network of employment and refuse to be anything but themselves,” read another tweet shared by Siwa. “Being connected to a kids channel shouldn’t mean you have to stop being yourself. @itsjojosiwa and @oliviarodrigo y’all are my hero’s.”

(Teen pop phenom Olivia Rodrigo — who got her start on Disney Channel and now stars in Disney+'s “High School Musical: The Musical: The Series” — won the Kids’ Choice Awards for breakout artist and female TV star.)

Nickelodeon did not immediately respond Monday to The Times’ request for comment.

Rated PG-13 for some suggestive material and brief language.

What it’s about: An unauthorized biopic inspired by the life of singing superstar Celine Dion, fictionalized here as Aline Dieu.