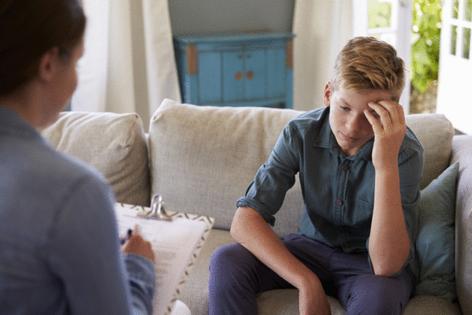 Q. My children’s mother always struggled with depression, but I never saw her as bad as she was at the height of the pandemic. She could not get out of bed. We share our 15-year-old son equally and it got to the point that he refused to go back to his mother’s home. I think his refusal made her worse, but he said he didn’t know how to take care of her, and it was just too much for him. Now that things have opened up and his mother is feeling better, he still refuses to return. Should I make him? What’s good ex-etiquette?

A. Thank you for your question. The pandemic affected us all, but particularly those of us who struggle with depression. Should you make your son return? I’m not sure. I need some more information specific to your case. But I can offer you some general advice from the information you have included in your email.

When working with kids whose parents have a mental health diagnosis, there is a common thread of uncertainty. If a parent remains untreated, the child is in a constant state of waiting for the other shoe to drop. I hope your son is not avoiding his mother completely. If he is, that’s a huge red flag about his own mental state. He needs a professional to walk him through this — and so does his mother.

Depression is not something to sweep under the rug. Those who are depressed often can’t see their way out of it. Sometimes people improve on her own as the situation changes. However, if mom couldn’t get out of bed, she was right in the middle of a severe depression and needed help. And a 15-year-old child does not have the emotional wherewithal to be responsible for his mother’s well-being under those circumstances. When he was telling you he didn’t know how to take care of her, he was asking for help.

Often times when something like this happens, the other parent returns to court seeking full custody. Rather than considering ways to help, they use a parent’s mental illness as a reason to change the custody order and keep the kids.

As a child custody mediator for the court system, I was always impressed when a co-parent would step up to help temporarily, offering the children a safe and secure place when a parent was ill or financially strapped. What puts fear in both the children and the ill parent is if their co-parent refuses to go back to the original parenting plan (or at least a modified version) once the parent is more stable.

Of course, if the children are not safe, a co-parent must intercede, and a permanent change might be appropriate. But it has been my experience that most of the time this is not necessary, and the court does not get involved if the parent with the diagnosis has a history of dependability, takes their prescribed medication and regularly attends therapy.

The bottom line here is, if your son is refusing to see his mother, take that as mayday call for help. He needs the support of a professional to educate him and ease his fears. Do your best to facilitate mother/son time. That’s co-parenting at its finest — and good ex-etiquette.

Q. My ex and I had an amicable split. After a year or so, we put together a parenting plan that worked, but we left off Father’s Day and Mother’s Day. That means our son may be scheduled to spend Father’s Day with me...Read More

Q. My ex has been diagnosed with bipolar disorder. It makes it very difficult to co-parent. Will the courts grant me full custody when the other parent has a diagnosis like that? What’s good ex-etiquette?

Dear Mr. Dad: My parents divorced when I was a teen, and I had a difficult relationship with my alcoholic father, which impacted my self-worth and adult relationships for years. Now, as a stepfather, I see my young-adult ...Read More

Q. My wife and I have been married for 6 months. I’m very close to my ex—she’s the mother of our three children and the kids go back and forth between our homes. My wife was going through my phone and found some ...Read More