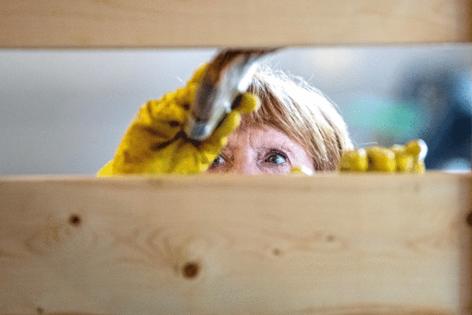 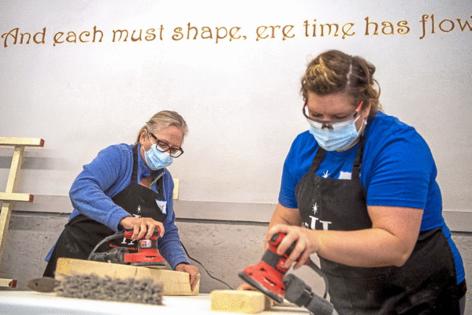 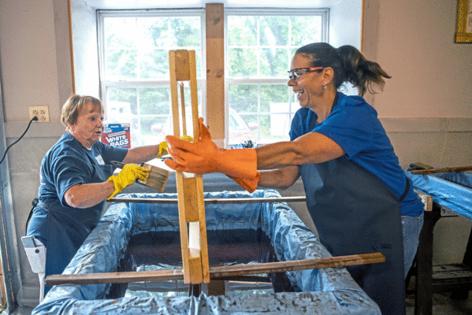 PITTSBURGH — Ed and Elaine Snyder were looking for a new project.

The retired couple, who live in Mars, Butler County, Pennsylvania, were looking for other activities after tackling two house flips. It was then their daughter-in-law mentioned they should consider getting involved with a charity with which she had been volunteering.

They got involved with Sleep in Heavenly Peace, a nonprofit charity with around 250 chapters throughout the country that build wooden twin beds from scratch to give to children who don’t have them.

The organization, founded in Twin Falls, Idaho, did not have a chapter in Western Pennsylvania, although a few dotted the eastern side of the state, according to Snyder. So they started one of their own, along with friend David Nock, with a ribbon-cutting ceremony in February.

The couple went to training at the Idaho headquarters of Sleep in Heavenly Peace in October 2020 and subsequently rented warehouse space at faith-based construction nonprofit Hosanna Industries in New Sewickley, Beaver County. They also purchased four tables for sanding pine picked out for the beds, woodworking jigs, drill machines and more equipment. Each headboard is hand branded with a hot iron: “SHP.”

Snyder explained the old-fashioned but effective technique of using troughs filled with a solution of vinegar and steel wool to stain the wood, which involves weeks of stirring before soaking the individual pieces for just 20 seconds. The Snyders also purchase twin mattresses for the beds as well as sheets, pillows, blankets and comforters. In a typical “build day,” they and volunteers will construct 10 to 15 beds, and they’ve given away more than 30 since March.

“Everything’s new,” Elaine Snyder said. “If their parents can’t afford a bed, that’s an incident that happened to them. That’s not their fault. They deserve to have a bed the same as everyone else. We really deck them out.”

The chapter of Sleep in Heavenly Peace will deliver within a 40-minute drive of either the Snyders’ home in Mars or the New Sewickley warehouse to Butler, Beaver and Allegheny counties and assemble the beds, which are sometimes bunked. During a recent weekend, they delivered beds in Butler, Beaver Falls, Ambridge and Avalon.

Snyder said 2 to 3% of U.S. children do not have a bed to sleep in, and children and youth services departments will not place a child in a home, even with a relative, without a bed for them. Nearly all of the deliveries so far, she noted, have been to families headed by single mothers, and the beds are for ages 3 to 17.

Believing in yourself completely is a little like unconditional love: It is all too rare.

I don’t mean to depress you, but that’s the reality for most of us earthlings. That’s why it’s so important to gather ...Read More

From 2009 to 2013, I was in a serious relationship — one where we talked about the “M” word (marriage, not mirrors or mugs, like the ones we bought together).

In that relationship, I was blinded by my partner’s �...Read More

CHARLOTTE, N.C. — Jamie Michetti is thinking back to that gorgeous spring day in Charleston, South Carolina, just one month ago, when her fiance became her husband.

Thinking back to one very specific, very special, but ...Read More

Starting on a new dating app or website can feel like New Year’s Day (usually without the hangover), and there are a ton of possibilities ahead. You can’t help but be a little giddy with hope and excitement. You set up...Read More