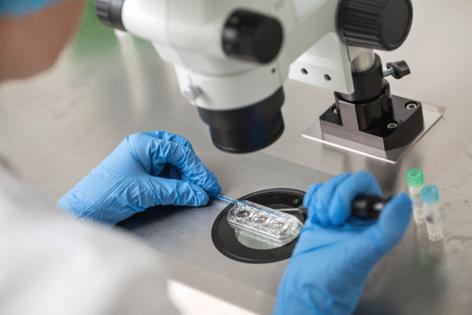 After years of trying to have a baby without success, Brenna Kaminski and her husband, Joshua Pritt, decided to try in vitro fertilization.

Only 15 states require insurance to cover fertility treatments, and Florida, where Kaminski and Pritt live, isn’t one of them. Still, the couple’s insurance, from Pritt’s job at an energy company, did — putting them among the fortunate minority of Americans whose insurance plan covers the pricey fertility procedure. Kaminski and Pritt gamed out what their share of the cost would be for one round of IVF: $2,700, the out-of-pocket maximum under their policy.

Instead, after many twists and turns with two specialty practices, they paid more than $15,000 for two rounds of IVF, including all medicines. And, as is true for the majority of the procedures nationally (success rates vary from 12% to 49% depending on a patient’s age), neither round resulted in a viable pregnancy. “This whole thing has been a nightmare,” said Kaminski, 37, who does freelance marketing and writing. “The stress has been unbelievable.”

About 1 in 5 women have trouble getting pregnant, and IVF has become a common path to parenthood for many. But even as demand grows, insurance coverage remains limited. About 27% of companies with 500 or more employees covered IVF in 2020, up from about 24% in 2015, according to Mercer, a consulting firm.

“Infertility is a disease and should be treated as such, and insurance coverage should reflect that,” said Dr. Kara Goldman, associate professor of obstetrics and gynecology at Northwestern University. “Coverage is often incomplete because people too often don’t see infertility as equal to other diseases.”

The first in-network specialists they tried, in spring 2020, had an office nearby, in Viera, Florida. But after seeing a doctor, they learned they had to travel 3½ hours to Miami, where the physician performed the IVF procedures over three separate visits.

The couple paid about $2,700 out-of-pocket for the medicines alone. They also paid an additional $500 because the fertility clinic required them to use an out-of-network lab for blood tests.

In November 2020, the couple decided to try again, with another fertility medical group listed in their Blue Cross provider network. It was in Winter Park, Florida, about an hour’s drive from their home.

Kaminski visited with doctors at the Center for Reproductive Medicine, and they scheduled her to begin the procedure at their facility in the same building. But that facility, the Orlando Avenue Surgery Center, was not in the Blue Cross network.

May is National Stroke Awareness Month. According to the CDC, a stroke occurs every 40 seconds in the U.S. Do you know that stroke is a leading cause of death and disability in the United States?

A stroke happens when ...Read More

Researchers say there are precautions those heading outside can take to limit risk from disease-carrying ticks. Take time to familiarize yourself with which tick species may be common in your area, as well as some common ...Read More

This is Atrium Health’s ...Read More