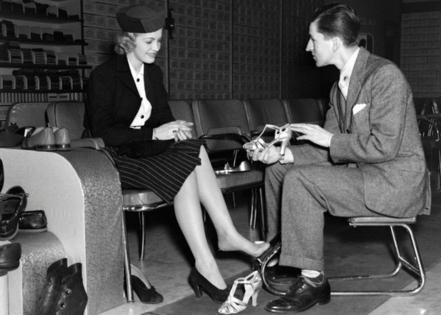 From cobblers to e-commerce: How buying shoes has changed over 300 years

Yes, shoes can be considered utilitarian, but for many people, they’re beloved. How deep does that love go? Former Philippines First Lady Imelda Marcos opened the Shoe Museum of Marinka in the early 2000s to showcase her more than 2,700 pairs of shoes. Footwear doesn’t need to be fancy to be meaningful. A favorite pair of muck boots can warm the heart, while sneakers can spur a lifelong affair.

The U.S. has the largest footwear market worldwide, bringing in more than $100 billion in 2021 alone, according to The NPD Group. Raking in a good portion of that market are industry giants like Foot Locker, New Balance, and Clark’s. For example, Nike’s sales were$44.5 billion last year.

It’s no surprise then that Americans spend an average of $419 per year on footwear. Where have they shopped throughout the years?Wicked Reports shares the U.S. history of shoe purchasing, from specialty shoemakers to online retailers. 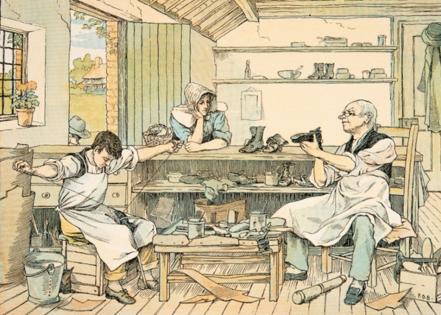 When European immigrants set off for North America, they took four allotted pairs of shoes with them. As those shoes began to wear, they took note of Native Americans’ footwear and adopted their use of moccasins.

There were cobblers in Jamestown as early as 1607, with the colony’s founder, John Smith, among their ranks. Cobblers repair shoes, leaving the creation of footwear to cordwainers or shoemakers. The first known cordwainer to arrive in America was British shoemaker Christopher Nelme in 1619.

Fast forward to 1629, when London shoemaker Thomas Beard was dispatched to Salem, Massachusetts, bringing along leather hides and shoemaking tools. In short order, the settlers welcomed him with open arms and began raising cattle with an eye on tanning leather for shoes. New England cordwainers set up shops, often in their homes. Thus, America’s shoe industry was born. 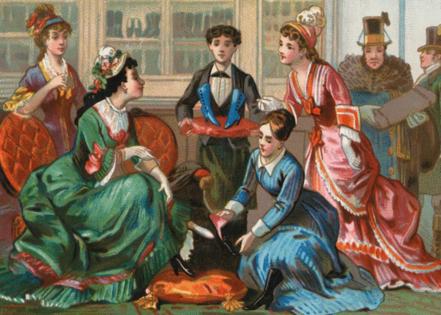 General stores were a one-stop shop for many towns in early North America. Gray’s General Store in Adamsville, Rhode Island, in 1788 is purported to be the oldest store in the U.S. These stores would evolve into mom-and-pop, family-run businesses that specialized in certain types of goods, including shoes.

In downtown Belfast, Maine, a sign outside a store proclaims, “Colburn Shoes: Oldest Shoe Store in America 1832.” Solely devoted to shoes, this brick-and-mortar venue was run by the Colburn family for several generations. When it was purchased by the Horne family, its new owners retained the store’s original name. Today, Colburn shoppers still get personalized service, from having their feet measured by aBrannock Device to having the fit and gait checked. 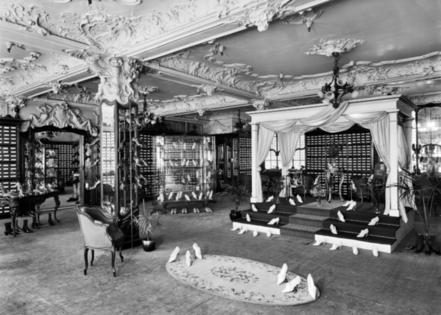 Abraham Lincoln is said to have purchased his menswear from H. & D.H. Brooks & Co. This establishment is today known as Brooks Brothers, the oldest menswear department store in America, founded in Manhattan in 1818. Today, Brooks Brothers stores can be found nationwide and have gone on to clothe more than 40 U.S. presidents.

New York City was also the site of Arnold Constable & Company. Founded in 1825, Arnold Constable would grow exponentially, requiring amove to a five-story property in 1857 known as the Marble House, then in 1869, to a building called the Palace of Trade.

Growing ever larger, New York-based department stores became architectural wonders unto themselves. Such was the case withA.T. Stewart’s Dry Goods located in an Italianate building known as the “Marble Palace” on 280 Broadway. These department stores all had one thing in common: shoe departments.

With department stores growing larger by the decade, they would soon be joined by the dawn of malls. Providence, Rhode Island, opened theArcade Providence in 1828. Not far behind was Watertown, New York’sPaddock Arcade built in 1850. The multitude of stores definitely had shoppers eyeing comfy footwear in store windows. 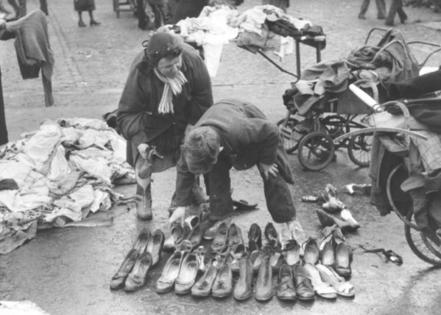 While secondhand clothing was once stigmatized, the tides changed in the late 1800s with the introduction of the Salvation Army in 1897 and Goodwill in 1902. Originally, these charitable organizations were a way for the poor to exchange their used goods for food and lodging. The timing for such nonprofits dovetailed with the Industrial Revolution and a sudden abundance of new fabrics and clothing that saw people regularly casting off wardrobe items.

As thrifting became more popular, storefronts started springing up. By 1935, there were nearly 100 Goodwill stores nationwide. Fast-forward to today, thrift store shopping is a$14.4 billion industry, with more than25,000 resale shops throughout the U.S.

The annual percentage of Americans shopping at thrift stores is approximately 16% to 18%, with 12% to 15% making purchases in consignment stores, according to consumer research firm America Research Group. Where everyone else is shopping? Factory outlets had 11.4% of the U.S. population lining up at their registers, with 19.6% at apparel stores and 21.3% at department stores.

Shoe fans know thrift stores, consignment shops, and garage/tag and estate sales not only offer great deals, but high-end designer gems that have been cast off. 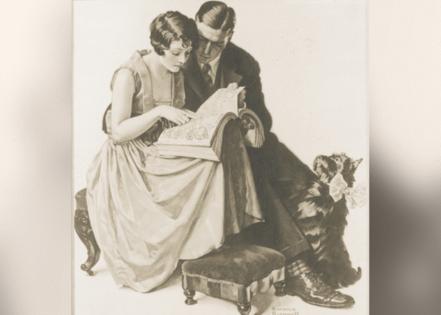 For shoe shoppers residing in rural areas without easy access to department stores and malls, the dawn of catalogs and mail order shopping was a godsend. The first mail-ordercatalog was Montgomery Ward. Initially a single sheet of paper, the catalog was written in 1872 by Founder Aaron Montgomery Ward and contained 163 items. Sears & Roebuck came along in 1888, with its mail-order offerings expanding to include clothing.

Both Montgomery Ward and Sears would eventually open brick-and-mortar stores in addition to their catalogs. The dawn of online shopping eventually led to those storefronts’ demise. Though both brands still exist online, most shoppers have gravitated to sites like Amazon to buy shoes. 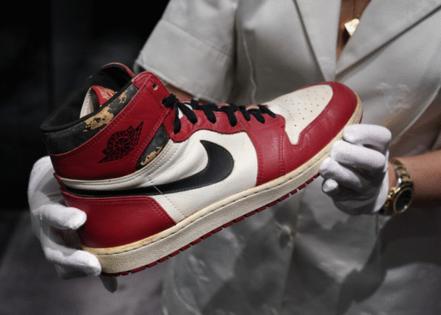 When did kicks go from cool to super cool? Some would say 1984, when Nike first introduced theAir Jordan 1. By the time the basketball shoes were released in 1985, a fever had taken hold. Hip-hop’s ties to the trend came into play in 1986, when Run-DMC released its single “My Adidas.” Adidas took notice of the rap group’s influence on its fans and ponied up a $1 million endorsement deal. As a result, the brand sold more than 500,000 pairs in 1986. The sneaker culture was a securely cemented movement.

Accompanying this was drop culture, fueled by social media. Building hype for new, limited-edition releases from shoe brands, drops hit with little notice and in limited quantities. Sites like StockX are destinations that have cropped up to meet the demand of sneakerheads. This has led to shoe collectors of a different kind. These collectors don’t necessarily wear their shoes, which would diminish their worth.

A sneaker that has been previously worn by a celebrity can bring in big bucks at an auction. A 2008 pair of Nike Air Yeezy Grammy Prototype worn by Kanye West sold for $1.8 million through Sotheby’s in April 2021. 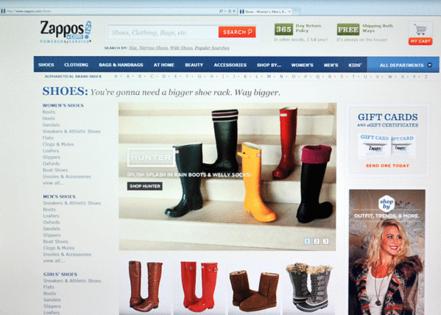 Though it was established in 1995, Amazon wasn’t an instant success. It started as a bookseller, eventually adding CDs and DVDs three years later. In 2002, it struck up a partnership with clothing companies to offer the latest styles. Today, the online giant offers everything from fine art and groceries, to live-streaming entertainment and shoes.

Among the many shopping innovations the e-commerce giant introduced was third-party sellers offering new and used items; Amazon Prime, a membership loyalty model offering exclusive deals and services; and Sunday deliveries. Before Amazon got into footwear, there was Zappos. Established in 1999, Zappos had a fulfillment center with the largest carousel system in the U.S. up and running by 2002. By 2008, Zappo’s annual sales exceeded $1 billion. A year later, Amazon purchased Zappos for $1.2 billion.

This story originally appeared on Wicked Reports and was produced and distributed in partnership with Stacker Studio.

Due to the COVID-19 pandemic, hybrid work environments have grown in popularity and seem to be here to stay. As of January 2022, 58% of employees work in hybrid models, according to a Future Forum survey of more than 10,...Read More

Household chores are more than inconvenient necessities or things to “make” your children do: They can function as building blocks for a young person’s development. The Centers for Disease Control and Prevention has...Read More

Selling a home can be stressful no matter the price bracket or the neighborhood. Additionally, the pandemic has added more complications to the current housing market in America, even as the Federal Reserve made a ...Read More

As Americans ease out of the pandemic phase, many have been feeling the financial crunch of inflation as the cost of food, fuel, and services have rapidly risen. While the rate—and speed—of inflation hasn’t been ...Read More

If you’re asked to name a few loyal friends, chances are your dog’s name would be top of mind. They’re the friends waiting patiently by the door when you return home, showing every ounce of gratitude for a full ...Read More

Imagine our world, then picture it fully digital. For many, it looks like the metaverse, an immersive virtual space where we can log on to meet friends, shop, work in virtual offices, and even buy virtual real estate. ...Read More